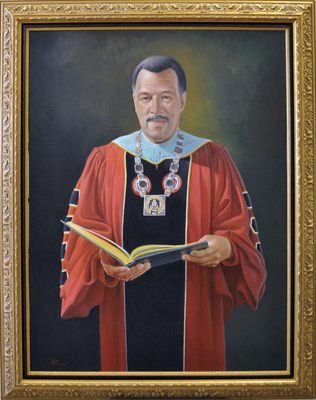 Dana Mohler-Faria Mohler-Faria was inaugurated as the eleventh president of Bridgewater in October 2002 after almost thirty years of administrative experience in Massachusetts public higher education. A native of southeastern Massachusetts, Mohler-Faria served in the U.S. Air Force before pursuing an associate’s degree from Cape Cod Community College (1972), followed by a BA (1974) and MA (1975) in history from Boston University and an EdD from the University of Massachusetts Amherst (1984).

Throughout his tenure as president, Mohler-Faria led and participated in regional and statewide projects to further higher education in Massachusetts. In 2003, Mohler-Faria spearheaded the establishment of the CONNECT partnership, linking Bridgewater with Bristol Community College, Cape Cod Community College, Massosoit Community College, Massachusetts Maritime Academy, and the University of Massachusetts-Dartmouth. That same year he initiated exploratory discussions with the Massachusetts state colleges’ Council of Presidents to consider seeking university status for the state colleges. Seven years of continued efforts were rewarded in July 2010 when the House of Representatives overwhelmingly approved legislation granting university status to the Commonwealth’s state colleges. During his tenure, a variety of programs aimed at academic enrichment and social support for at-risk youth in southeastern Massachusetts and the Greater Boston area were started. These included The Bridge Partnership with New Bedford Public Schools; FAM for Change, which paired BSU mentors with Brockton High freshmen deemed to be at high risk of dropping out; and the Concurrent Enrollment program, which provided the necessary support for students with cognitive disabilities as they attended BSU.

The Bridgewater campus experience was transformed during Mohler-Faria’s presidency. The first LEED-certified residence hall opened in September 2007; the first LEED-certified academic building, the state-of-the-art Science and Mathematics Center, opened in September 2011. Full-time enrollment increased by almost one third, to over 9,200 students by 2014. The number of full-time faculty increased by over 30%, to over 330. The percentage of students of color climbed from 6.2 to over 16% of the total student body. The number of graduate degrees awarded yearly almost doubled. As part of Bridgewater’s mission to serve the residents of southeastern Massachusetts, permanent Bridgewater satellite campuses were opened in Attleboro, New Bedford, and Cape Cod.