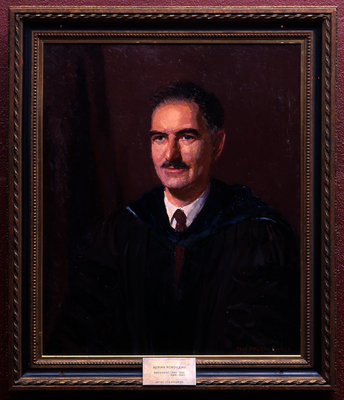 Dr. Adrian Rondileau (1912-2002) became president of Bridgewater State College in September 1962 after a long and successful career in college and university teaching and administration, both at home and abroad. He received his BA in philosophy from the City College of New York in 1932 and his MA (1933) and Ph.D. (1935) from Columbia University in psychology and economics, respectively. After teaching for eight years at Central Michigan University, Rondileau left for a position as an exchange consultant and lecturer with Brazil’s Ministry of Education under the auspices of the U.S. State Department. Upon his return to the United States, Rondileau served as dean of business administration at the Associated Colleges of Upper New York and as dean of liberal arts at Pace University. From 1954 to 1962 he served as President of Yankton College in Yankton, South Dakota.

Rondileau’s legacy includes an extensive building program and the willingness to open campus governance to more input from both faculty and students. During his tenure, the student body increased from 1,000 to 9,000, and the campus expanded from 36 to 170 acres. Bridgewater State’s first international exchange program began under Rondileau, with the 1984 faculty/student exchange agreement with Shanxi University in China.

In 1967 Rondileau established a Town-College Committee to help build stronger relationships between the town of Bridgewater and the college. The following year he implemented a Faculty Council whose members were charged with making recommendations to the president concerning academic policy, professional standards, college development and faculty-student relations. Rondileau promoted active dialogue between the student body and the administration through forums and community meetings in order to avert student protests and anti-war demonstrations during the late 1960s and early 1970s.

Rondileau’s administration was guided by two basic principles. The first was the value of a broad-based education. The second was that after graduation, students should be prepared to become productive citizens after graduation. Rondileau announced his retirement in January 1986, effective the following September. As he left office, he was the third longest serving chief executive after the Boydens. In 1988, two years after his retirement, he returned to campus as acting president for the 1988-1989 academic year, following the scandalous tenure of Bridgewater’s 9th president, Gerard Indelicato. Rondileau died on November 20, 2002, at the age of 90.