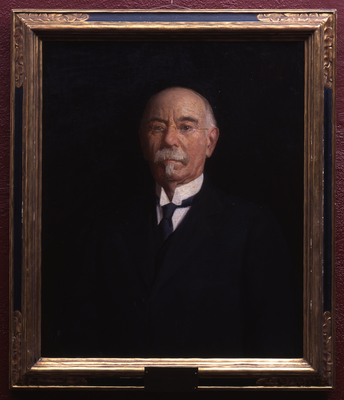 In his History of Bridgewater Normal School, prepared shortly before his death in 1933, Dr. Arthur Clarke Boyden, the fourth principal of the Normal School and the first president of the Teachers College at Bridgewater, wrote that the school “has had a continuous policy from its inception. Each principal was the ‘heir on the spot’ of a well-understood policy; this unbroken line of succession led to an unusual continuity of development.”

Dr. Boyden, who was born in Bridgewater in 1852, graduated from the Normal School in 1871, then went to Amherst College, from which he graduate with honors in 1876. After three years as a teacher of mathematics at Chauncy Hall School, Boston, he returned to the Normal School at Bridgewater, where he served for a total of fifty-four years, half of the period as principal.

He taught mathematics, the sciences, and history, but his great leadership was in teaching of sciences. He prepared a series of articles on nature study which formed a standard text-book for many years, lectured widely on nature study, served as an advisor in the teaching of natural sciences and biology to the National Committee of Ten headed by President Charles W. Eliot of Harvard in the 1890s, won a medal of the first grade at the Columbian Exposition in Chicago in 1892 and the St. Louis Exposition in 1904, and served as president of the Teachers’ School of Science formed under the Lowell Fund. He and his father gave the land for the natural science garden and greenhouse, which was formally opened in 1910.

No civic duty was unimportant to this amazing man. In his later years many of the buildings on campus were destroyed by fire, but Dr. Boyden, then in his late seventies, led the fight for the retention of the school in the town of Bridgewater and supervised the construction of the new building, which was later named Boyden Hall in honor of him and his father.

When the normal schools became state teachers colleges he was named Bridgewater State Teachers College’s first president. He died in 1933 at the age of eighty-one having devoted his whole life to the college that he loved.