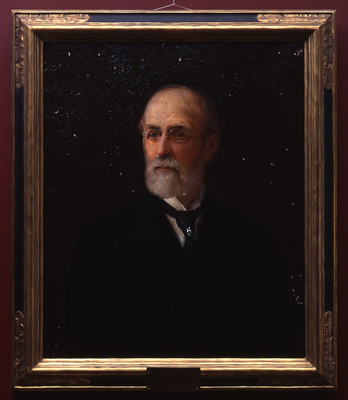 Albert Gardner Boyden, who assumed the principalship of Bridgewater in 1860 and served in that post for forty-six years, had been assistant to Tillinghast and Conant, and so was well-prepared for his duties. In his years as principal, the school underwent a tremendous change and expansion to meet the needs of the times.

A native of South Walpole, Massachusetts, where he was born on February 5, 1927, he had taught school for several years before coming to Bridgewater to study under Mr. Tillinghast. After completing his course, Mr. Boyden was invited to stay on as an assistant in the school, which he did from August, 1850, to October, 1853, when he left to serve in the public schools for four years. He returned to the college as Mr. Conant’s first assistant in 1857.

In Mr. Boyden’s administration, the curriculum of the school underwent a radical change. College-level courses were added, particularly in the sciences, mathematics, and in psychology, a four-year course of study was introduced, and the school developed an amazing expansion and building program.

A model school was constructed, laboratories and classified collections in the sciences were obtained, a science building was built, and the library holdings were increased extensively. Additional land was obtained, sometimes paid for by the principal out of his small salary, so that by the turn of the century the school owned fourteen acres. The original wooden building was enlarged in 1861 and again in 1871, then torn down and replaced by a large brick building in 1891, just after the semi-centennial anniversary of the school was commemorated. A boarding hall was built in 1869 and enlarged in 1873.

To the normal school faculty came a succession of outstanding teachers, some to serve long terms and others to use the normal school as a stepping-stone for advancement in public education. Many students came from other states, and foreign students came from Armenia, Syria, Japan, Burma, Mexico, Brazil, Canada, and other countries, and returned to their homelands to spread the Bridgewater tradition.

Only recently the college was visited by a great-grandson of one of these students, who told of the reverence with which the name of Boyden is held in his family to this day. A Japanese educator recently visited Bridgewater because he knew it as the training school of the famous Shuze Isawa, a Bridgewater graduate who is recognized as the founder of teacher education in Japan.

Even after his official retirement in 1906, Mr. Boyden continued to serve the school as a part-time teacher and lecturer until his death in 1915. The best expression of his philosophy is found in the conclusion of his address at the fiftieth anniversary of the founding of Bridgewater Normal School. He said:

“Let every graduate of the normal school and every friend of this country cherish these institutions with a jealous care and a generous support; and may all their graduates go forth in the spirit of Him who is the friend of all children and the master of all teachers, who came in this world not as the hireling cometh, but ‘that men might have life and that they might have it more abundantly,’ a more abundant physical, intellectual, emotional, and spiritual life, so that our public schools shall be a fountain of life, sending out its streams, to help perpetuate through all times the blessings of a Christian civilization.”