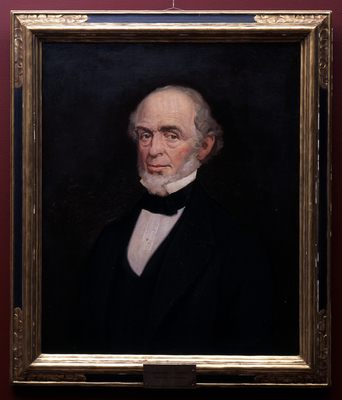 Marshall Conant, the second principal of Bridgewater Normal School, was born in Pomfret, Vermont, January 5, 1801, of parents who had emigrated from Bridgewater, Massachusetts. He attended the district schools in his native state and in his youth was apprenticed to a carpenter. Having developed an interest in mechanics, he decided to become an architect and carried on a rigorous program of mental improvement.

He began his teaching in his own district and in his free time studied geometry, calculus, and astronomy. At the age of twenty-four, despite his limited education and equipment, he computed a lunar eclipse and a solar eclipse and was overjoyed to find his calculations verified. He also constructed a table for a systematic method of making his computations. In the summer of 1828, he calculated an Almanac for 1829, of which 10,000 copies were sold. He taught in Boston and Roxbury and in 1837 went to Hillsboro, Illinois, where he headed a new academy established there, in which his wife Roxanne also taught.

Conant returned to Massachusetts in 1841 and shortly afterward was named head of the topographical department of the Boston Water Works. During his four years in this post, the first major water lines of Boston were constructed. He made many computations in hydraulics, and some of his papers of this period are in the college archives.

When this work was completed he became the engineer in charge of constructing the new railroad from Dover, New Hampshire to Lake Winnipesaukee. In 1852 he moved to Bridgewater, the home of his ancestors, where he became superintendent of the Eagle Cotton Gin Company.

In his new home he became friendly with Nicholas Tillinghast, and so impressed Tillinghast that when the principal resigned in 1853 he recommended that Marshall Conant be appointed his successor and the Board of Education concurred.

In his administration Mr. Conant expanded the scientific studies in the Normal School, adding books to the school library, anatomical plates, historical, geological and geographical maps, and scientific apparatus, including an orrery, which he made. He also helped to organize the Bridgewater Natural History Society and delivered the opening lecture to this group. He sent forth many excellent teachers, some of whom headed and developed Normal Schools in many parts of the country, and he brought to the Normal School faculty two of its most illustrious members, Albert Gardner Boyden and Eliza B. Woodward, both of whom came to the school in the fall of 1857. When he resigned from the principalship in 1860, the foundation of a professional school for teachers was firmly laid.

In 1862 George Boutwell, Director of the Internal Revenue Service, named Mr. Conant as his assistant, and for the next ten years Conant resided in Washington, D.C. He returned to Bridgewater in 1872, broken in health but with a clear and active mind, and completed a manuscript for an astronomical publication shortly before his death in Bridgewater on February 10, 1873.

Of Mr. Conant, his successor, Albert Gardner Boyden, wrote: “His whole mind and strength were given to his teaching; his genial manner, his ready command of language, and his faculty in illustration, always secured the attention of his pupils. In his favorite studies of Mathematics, Astronomy, and Mechanics, he was very clear, definite, and original in his methods. By his fidelity, his devotion, his enthusiasm, and the inspiration of his life, he was constantly drawing his pupils to higher fields of thought and higher attainment.” Can there really be a better tribute to a teacher?