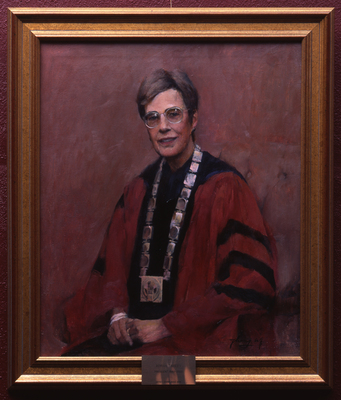 Dr. Adrian Tinsley assumed the presidency of Bridgewater State College in June 1989, the first woman to lead the institution. Tinsley grew up in Virginia, graduated with honors from Bryn Mawr College in 1958 with a degree in psychology and earned a master’s degree from the University of Washington (1962) and a Ph.D. from Cornell (1969), both in the field of English literature. Tinsley first taught at Cornell, followed by an appointment at the University of Maryland where she developed the first women’s studies program. She was soon appointed as dean of William James College, a unit of the Grand Valley State Colleges in Michigan. After a decade at William James College, Tinsley became associate vice chancellor for academic affairs in the Minnesota state university system in 1982. Three years later Tinsley assumed the post of executive vice president and provost at Glassboro State College in New Jersey.

During her tenure at Bridgewater, Tinsley accomplished much, including clarifying the vision for Bridgewater; establishing the new academic structure and creating new schools and academic programs; modernizing the financial systems; constructing an Athletic Center and a Technology Center; introducing new computing and telecommunications technology; integrating alumni affairs and development into an advancement division; initiating the first capital campaign; and making and solidifying connections with political leaders in the Commonwealth.

Early in her presidency, Tinsley began to develop an organizational structure for Bridgewater based on academic schools, each with its own dean. The School of Arts and Sciences and the School of Education and Allied Studies were established in 1990-91, later followed by the School of Managements and Aviation Science.

Undergraduate and graduate curriculums were expanded, with new majors introduced in criminal justice, economics, and music, and new master’s degree programs in public administration, criminal justice, and management science. Funding was allocated by the College Foundation to support the research, scholarship and creative activities of the college’s faculty and librarians through a research grants program. In 2000, Bridgewater established its first undergraduate research program, providing funding for 10 students engaged in environmental research.

Investment in technology was demonstrated by the construction of a modern technology center on campus. In 1990 Congressman Joseph Moakley acquired a $10 million federal grant to update technologies at Bridgewater – at the time the largest amount ever awarded by the federal government to a college in Bridgewater’s mission class. The John Joseph Moakley Center for Technological Applications opened in September 1995. By the end of Tinsley’s tenure, the Bridgewater campus was recognized as one of America’s “Top 50 Most Wired Colleges.”

Adrian Tinsley launched the college’s first ever public endowment campaign in the fall of 1999. By the campaign’s end in 2002, $10 million had been raised. Over 70 acres of land were added to the campus during the Tinsley presidency, guaranteeing room for future expansion. Several new buildings were constructed while Tinsley led the college: the Moakley Center, East Hall (a 300-bed residence hall); East Campus Commons (700-seat dining hall), a campus Operations Center for campus police and facilities, and a new athletic center (named in Tinsley’s honor). By the end of Tinsley’s term, Bridgewater was the second largest public college or university in Massachusetts in terms of square footage, behind only the University of Massachusetts-Amherst.