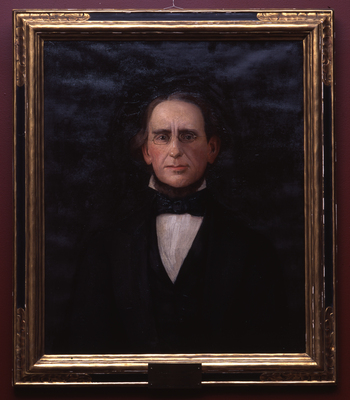 Nicholas Tillinghast (1804-1856), the first principal of Bridgewater Normal School, was a Boston schoolmaster at the time of his appointment to the post by Horace Mann. A native of Taunton, son of a prominent lawyer and postmaster there, Mr. Tillinghast had graduated from the U.S. Military Academy at West Point, had attained the rank of Captain in the Army, and had taught natural sciences and ethics at West Point before retiring to civil life.

When the new school opened in the fall of 1840, twenty-eight students, seven young men and twenty-one girls, were admitted. For much of the first year and on several occasions later, the principal taught all of the courses and did all of the administrative work in a large classroom with plain pine desks and chairs and little or no apparatus.

Discouraged by the irregularity of attendance by the pupils, the lack of assistance, and the total inadequacy of the facilities, the principal attempted to resign in 1845. The Board of Education fortunately refused to accept his resignation, changed the rules of the school to require students to attend the school for three consecutive terms of fourteen weeks each, made provisions for assistant teachers, and a few months later appropriated part of the cost of a new normal school building, the first state normal school building in America.

Many prominent educators sought his advice, and his students went forth to become successful teachers, principals, normal school heads, and superintendents of schools. Worn out by overwork, he resigned in 1853 and died three years later at the age of fifty-one.

Albert Gardner Boyden, who studied under him and worked under his direction for three years, wrote that Mr. Tillinghast was an educator who sought to give his students command of themselves and of the principles of education, so that they might be able to practice the art of teaching in the education of children. . . . The secret of his power lay in his personal character; he was himself what he sought to have his pupils be. He gave the whole energy of his soul to the great work which was given him to accomplish, and established the school upon a deep and broad foundation. He built the character of many an earnest and successful teacher. His spirit, his views, his method have become a part of our educational system. . . . Who can estimate the beneficent influence exerted by such a life, silent and powerful in its working as the sunlight, upon the educational interests of our country?