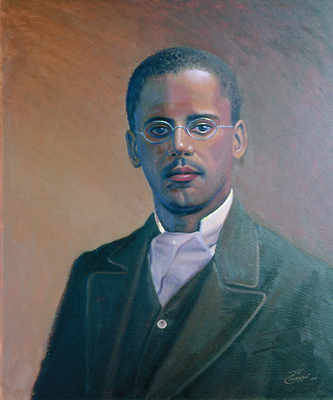 Lewis Latimer was one of the pioneers in the electric light industry from its creation until it became worldwide in its influence. Latimer’s great sense of accomplishment was outstanding, even in his childhood. His self-made background was indeed one of talent, and his many abilities were destined to bring him recognition. Latimer was born in Chelsea, Massachusetts on September 4, 1848, and reared in Boston. He was the fourth child of George and Rebecca Latimer. His father, a former slave, had fled to Boston from a Norfolk, Virginia plantation during the 1830s to get away from slavery.

George Latimer’s limited financial means as a self-employed barber and paperhanger enabled him to provide only a few years of grammar school for his four children. Lewis, nonetheless, developed an avid interest in drawing, musical performance, and writing literary composition. Determined to obtain an education, but aware of the need to help support his family, Lewis Latimer apprenticed at night with his father in a store on Washington Street, becoming quite proficient in the paperhanging trade.

Because of his father’s background, Lewis Latimer had deep feelings concerning abolition, and in 1864 at the age of 16, he enlisted in the Union Navy during the Civil War. He received an honorable discharge July 3, 1865, and resumed an active civilian career in Boston at the close of the Civil War. Keen insight into technical matters secured the young man employment as an assistant in the establishment of Grosby & Gould, a Boston firm of patent solicitors. Believing that “whatever a man knew he put in a book,” Latimer cultivated an interest in drafting, and taught himself to be a draftsman in his spare time. He watched draftsmen in the office, and then went home and practiced his observations, using second-hand instruments and a book on drawing as a guide. He was soon elevated to the job of chief draftsman, a position he held during much of his eleven year employment with Grosby & Gould.

On November 10, 1873, Mr. Latimer married Mary Wilson and their family grew in time with the birth of two daughters, Jeanette and Louise. His first patent, approved on February 10, 1874, was for a water closet for railroad cars. In 1876, at the inventor’s personal request, Latimer executed the drawings and assisted in the preparation of patent applications for Alexander Graham Bell’s telephone – an invention which was to herald great change in the field of communication.

Hiram S. Maxim, American inventor and founder of the United States Lighting Company at Bridgeport, Connecticut, was impressed with his inventive abilities and in 1880 requested him to join the firm as draftsman and general assistant. While working in this capacity, Latimer developed and patented a process for manufacturing carbon filaments for incandescent lamps (U.S. Patent No. 252,386, January 17, 1882). Late in 1884, Latimer assumed employment with the young Edison Electric Light Company, a pioneer establishment, as a draftsman-engineer in New York City. He remained in that position through the initial consolidation of several subsidiary Edison interests into the Edison General Electric Company in 1889. In 1890, Mr. Latimer was transferred to the legal department where he served as draftsman and patent expert throughout final corporate mergers which, in April of 1892, resulted in the formation of the present General Electric Company. His dissertation entitled Incandescent Electric Lighting–Practical Description of the Edison System, was also published in 1890 by D. Van Nostrand Company of New York. The treatise is considered a milestone among many contributions made by the Edison Pioneers.

From 1896 until its dissolution in 1911, Latimer served as chief draftsman and full-time patent consultant for the Board of Patent Control that was jointly formed by General Electric and Westinghouse companies. In this capacity, he was solicited to testify as a patent authority in a number of infringement cases involving the two companies. Mr. Latimer’s many surviving court transcripts attest to his adeptness in defending original Edison patent claims in an era that was characterized by widespread patent abuse.

After dissolution of the Board of Patent Control, Latimer again became associated with Edwin W. Hammer, New York engineer, patent solicitor, and Edison pioneer. He remained with Hammer through the merger of Hammer and Schwartz until his retirement in early 1924, at the age of 75. Mr. Latimer received one of his most distinguished of honors by an invitation to become a charter member of the Edison Pioneers on January 24, 1918. He acted as adjutant and recording secretary to the George Huntsman Post at Flushing, Long Island, until his death on December 11, 1928.