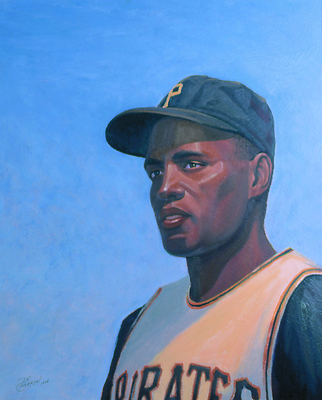 Roberto Walker Clemente, the first Latin American player to be admitted to the National Baseball Hall of Fame, was one of Major League Baseball’s greatest players. He was also one of the world’s best known and remembered humanitarians. His accomplishments on the field enabled him to dedicate his life to those less fortunate.

Mr. Clemente, born in Carolina, Puerto Rico on August 18, 1934, was the youngest child of Melchor and Luisa Clemente. The small town of Carolina was dominated by the sugar industry and few other opportunities existed. His father became a foreman for the local sugar company while his mother worked at the plantation house. Roberto’s father also sold meat and later purchased trucks that enabled him to enter the construction trade on a part-time basis. The Clementes valued education, and they wanted their son to be an engineer.

Although Roberto was a good student, he had an early interest in baseball. He frequently engaged in poor person’s baseball practice – hitting tin cans with a stick. In addition to playing baseball during high school, he pursued track and javelin, throwing to the extent that he was considered a potential Olympic competitor. Roberto was judged to be a natural athlete by many. He demonstrated a supreme love of baseball while aiming for excellence in every chosen endeavor.

Interestingly, his entry into the sport of baseball occurred when local businessman Roberto Marin spotted the fourteen year old whacking tin cans in 1948. He was recruited for Marin’s Sello Rojo Rice softball squad, and was then acquired by the Juncos, a Double-A amateur baseball team. Marin continued to be Roberto’s unofficial publicist. He told his friend, Pedrin Zorilla, Brooklyn Dodgers scout and owner of the Puerto Rican league team, the Santurce Crabbers, that the young lad was unbelievable. Shortly thereafter, Zorilla happened to be watching a Juncos exhibition game and discovered Marin’s protege.

In 1952, Roberto signed on with the Santurce Crabbers for a $400 bonus and $40 a week. By the 1953-54 season, he had become a regular and nine professional teams approached him with contract offers that winter. Roberto chose the Brooklyn Dodgers in February of 1954 and was assigned to the Triple-A Montreal Royals. His $10,000 bonus, which exceeded that of any other Hispanic professional, made him eligible for the draft in the following year. The Pittsburgh Pirates, a perennial losing team, were entitled to a first-round draft pick by virtue of their last-place standing. They chose Roberto Clemente in November 1954 for a $4,000 draft price.

His first season in Pittsburgh was one of transition. Although he was a regular player by his second week, he felt a deep loneliness. Roberto was not fluent in English, and Pittsburgh did not have a Hispanic community. When the rookie heard slurs against opposing players, he knew that similar comments were being directed at him. Roberto combated such attitudes throughout his career. Moreover, the Pirates’ cave-like ball park was not accommodating to home runs, but Roberto adapted by becoming a stellar line-drive hitter. His batting average rose from .255 in 1955 to .311 in 1956. The right fielder began to build a reputation as one of the game’s strongest and most versatile talents. He robbed his opponents of home runs, bare-handing high fly balls and colliding into stadium walls. The Pittsburgh fans called him the “Great One.”

Roberto traveled home to Puerto Rico after each season where he continued to play in and manage Puerto Rican league teams. It was there that he met Vera Zabala. They married in 1964 and had three sons.

Roberto Clemente’s 3,000th hit came on September 30, 1972, and it was to be his last. In an interview conducted shortly after the 1972 season ended, Clemente said “I am convinced that God wanted me to be a baseball player. I was born to play baseball.”

His charitable acts were legendary. Citizens asked Roberto to run for Mayor of San Juan, and in Pittsburgh, he was a mentor to young Hispanic ballplayers. It was in 1972 that an earthquake ravaged Managua, Nicaragua. As honorary chair of the Nicaraguan Relief Committee, he decided to go there himself on a small plane loaded with food, clothing, and medical supplies. Moments after takeoff from San Juan, Puerto Rico, just a mile from his home and birthplace, the aircraft crashed and sank into the Atlantic Ocean, killing everyone aboard. He was just 38 years old. As tragic as this incident was, one of Roberto’s greatest dreams was realized. Thousands of memorial gifts arrived, generating enough money to build the Cuidad Deportiva, where Puerto Rican boys could cultivate their talents under the guidance of professional athletes.

On August 6, 1973, he became the first Latin American player to be voted into the National Baseball Hall of Fame, and that same year, his number, 21, was retired by the Pittsburgh Pirates. In 1975, he was inducted into the Black Athletes Hall of Fame. He would later become the second baseball player, after Jackie Robinson, to be pictured on a U.S. postage stamp.