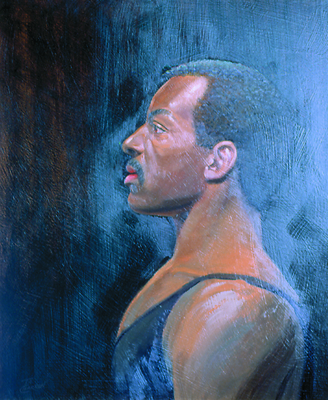 Danny Sloan was born in Camden, New Jersey. Inspired by a televised performance of Alwin Nikolais, Sloan began his dance education at the late age of twenty. He received a scholarship at the Pennsylvania School of Ballet where he often fought prejudices that discouraged African-Americans from studying ballet. Sloan eventually moved to New York City and studied at the Joffrey Ballet. He found living in New York difficult and when faced with a decision between a small Broadway role or an opportunity to move to Boston and help Talley Beatty establish a dance company, he opted for the latter. In 1969 Sloan moved to Boston, the city that would become the center for his work as a performer, choreographer, and educator.

Talley Beatty was invited to be a guest artist at the Elma Lewis School in Roxbury. He was well versed in Graham technique and was one of the first African-Americans to study at the prestigious School of American Ballet founded by Lincoln Kirsten and George Balanchine. He was also one of the first nine dancers to tour with Katherine Dunham. Talley Beatty’s choreography and Katherine Dunham’s technique became the defining influences on Danny Sloan. Beatty’s residency at the Elma Lewis School fostered a new dance company called the Dance Company of the National Center for Afro-American Artists. Following Beatty’s stay in Boston the company was directed by choreographer Billy Wilson. Sloan played a major role as a performer in this all black company dancing in the works of these two important choreographers. Although the DCNCAAA was committed to presenting works by various African-American choreographers, by 1975 Sloan’s choreography dominated the playbill. In 1976 he began the process of creating his own company.

The Danny Sloan Dance Company became a successful force in the New England dance community. The establishment of the company and its dedication to keeping the works of choreographers such as Geoffrey Holder, Billy Wilson, and Talley Beatty in its repertory played an important role in extending the influence of seminal African-American choreographers outside of New York City. His solidly trained dancers presented well crafted modern-based jazz choreography to communities throughout the Northeast. Sloan’s choreography included work that expressed the African American experience as well as high quality abstract dances. His company specifically targeted communities that might otherwise not have been exposed to dance. Not only did the Danny Sloan Dance Company carry the important choreographic works of Talley Beatty and Geoffrey Holder to inner city audiences, but it also provided a vehicle for young choreographers to show their work.

Sloan was also a distinguished teacher who instilled respect for the discipline of dance and a joyous sense of movement through his classes. He brought dance to disadvantaged children through his Inner City Dance Project and trained many adult performers and teachers in his strong technique. At various times throughout his career he was on the faculty of Boston Ballet, Jeanette Neill Studio, The Boston Conservatory of Music, Dean Junior College, The Walnut Hill School, and committed himself to residencies and master classes throughout New England.

He was honored by two choreographic fellowships from the Artists Foundation and received a Best of Boston Award for choreography in 1982. Danny Sloan’s contributions span over twenty-five years and reach deep into a broad cross section of the New England community. He leaves a significant body of dance work and has touched educators, artists, minority communities, and a wide range of audiences throughout New England. Bridgewater State University celebrates the important contributions of Danny Sloan as an performer, choreographer, and educator through the Hall of Black Achievement.