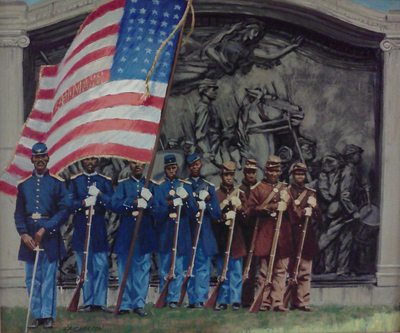 There’s a reason a well-known book about the 54th Regiment is called Undying Glory. For the accomplishments of this proud band of Civil War soldiers—the first black army unit assembled in the northern states—still inspires today.

The 54th Regiment came into existence with the stroke of a pen. In January 1863, President Abraham Lincoln, along with the signing of the Emancipation Proclamation, cleared the way for Massachusetts to assemble a group of black soldiers to fight in the war. The decision would have far-reaching effects both on the battlefield and in society.

African-Americans in the early 1860s were not widely viewed in this country as potential soldiers. Many people, even in the North, believed they lacked the courage and discipline needed in battle. Some even blamed them for the war, while others went so far as to speculate that black soldiers would hand over their arms to the enemy. Yet the soldiers of the 54th served bravely, despite facing hardships their white brethren did not. For one thing, the newspaper ads that helped recruit them promised equal pay. However, that turned out not to be the case.

Hence, the men of the 54th Regiment were forced to do battle on two fronts. While serving their country on the battlefield, they also had to fight for equal rights. They refused to settle for less compensation than white soldiers were receiving, and went without pay for 18 months. A corporal with the 54th took the case to President Lincoln in a letter, asking, “We have done a soldier’s duty, why can’t we have a soldier’s pay?” Eventually, the federal government relented and paid the men of the 54th what they were owed.

Also, black soldiers faced lawful enslavement or even execution if captured by Confederate troops. Meanwhile, their families back home were in danger, as anti-draft riots brought violence upon black neighborhoods.

Yet despite all this, the men of the 54th showed their mettle in battle. The regiment most famously led the attack on Fort Wagner, S.C., on July 18, 1863. Bayonets drawn, 600 soldiers of the regiment stormed the fort. Taking on the Confederate stronghold, they faced heavy firepower, and engaged in hand-to-hand combat. Losses were heavy, but the valiant regiment fought on.

Emblematic of the 54th’s bravery in battle, is the story of Sgt. William H. Carney, an African-American soldier from New Bedford. He was severely wounded as he carried the Union flag through the attack on Wagner, never letting it touch the ground or fall into enemy hands, all the while refusing to surrender to the bullets that tore into his body. He became the first African American in history to receive the Congressional Medal of Honor in 1900.

Nearly 100 soldiers of the 54th were killed or reported missing after the battle at Fort Wagner. However, the unit would continue fighting on, doing battle around Charleston, before being sent to Florida. There, the soldiers performed a crucial role at Olustee, and in other battles.

The regiment was mustered for a final time in Boston in late summer 1865, its accomplishments many, its legacy secure. They were the first, and 180,000 African Americans would follow their lead, and serve in the army before the War Between the States ended. More than 38,000 of these soldiers died in the war. Their service led President Lincoln to remark that without their help, the war against the South could not have been won.

Ultimately, the men of the Massachusetts 54th Regiment not only fought bravely for American liberty, but showed the world that if they were equal on the battlefield, they deserved equality in all aspects of life.