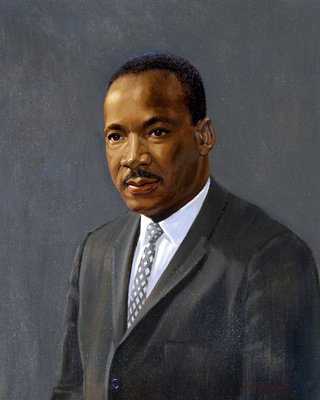 Rev. Dr. Martin Luther King, Jr. was a vital figure of the modern era. His lectures and dialogues stirred the concern and sparked the conscience of a generation. The movements and marches he led brought significant changes in the fabric of American life through his courage and selfless devotion. This devotion gave direction to thirteen years of civil rights activities. His charismatic leadership inspired men and women, young and old, in this nation and around the world. In a tribute to Dr. King, Time magazine said he, “led a mass struggle for racial equality that doomed segregation and changed America forever.”

A minister, civil rights leader, intellectual, social reformer, author, recipient of countless accolades and awards and winner of the 1964 Nobel Peace Prize, Dr. King was a charismatic leader who in a span of 13 years during the 1950s and 1960s provoked a revolution in laws and attitudes that transformed society. The results of his efforts continue to unfold today, decades after his death.

Dr. King was born Jan. 15, 1929, in Atlanta, a son of Rev. and Mrs. Martin Luther King. He grew up in a home two blocks west of the Ebenezer Baptist Church, the pastorate of Martin’s grandfather, who was a founder of Atlanta’s NAACP chapter. Eventually he would return to that church to become a pastor himself, sharing the pulpit with his father.

After graduating from Morehouse College in Atlanta in 1948, Dr. King’s path to the ministry began at Crozer Theological Seminary in Pennsylvania, and from there he enrolled at Boston University, where he deepened his understanding of theological scholarship and explored nonviolent strategy for social change promoted by Mahatma Gandhi of India. Bridgewater State University Professor Emeritus Henry Santos was a roommate of Dr. King’s while both were studying there. Dr. King received his Ph.D. in systematic theology in 1955.

In 1953 Dr. King married Coretta Scott, and over the years they would raise four children. In 1954, he accepted the pastorate at Dexter Avenue Baptist Church in Montgomery, Alabama, where the opening salvo in the modern civil rights movement occurred on the evening of Dec. 1, 1955. An African-American woman, Rosa Parks, was riding a bus home from work in when she was asked by the driver to give up her seat to a white man. When she refused, the driver called police and had her arrested.

In response, black residents launched a bus boycott and elected Dr. King president of the newly-formed “Montgomery Improvement Association.” The boycott continued throughout 1956 and Dr. King gained national prominence for his role in the campaign. In December 1956 the United States Supreme Court declared Alabama’s segregation laws unconstitutional and Montgomery buses were desegregated.

According to a biography written by Clayborne Carson and published by Stanford University, Dr. King sought to build upon the success in Montgomery, and in 1957 he joined with other southern black ministers to establish the “Southern Christian Leadership Conference” (SCLC). In 1959, he made a trip to India in an attempt to further his understanding of Gandhi’s nonviolent strategies.

In the spring of 1963, Dr. King and SCLC led mass demonstrations in Birmingham, where local white police officials were known for their violent opposition to integration. Clashes between unarmed black demonstrators and police armed with dogs and fire hoses generated news coverage throughout the world. In response to the Birmingham protests, President Kennedy authored broad civil rights legislation which was submitted to Congress, leading to the passage of the Civil Rights Act of 1964.

Spurred by the success of the movement, Dr. King and his followers organized mass demonstrations that culminated in the now-famous “March on Washington for Jobs and Freedom” on Aug. 28, 1963. More than 250,000 protesters gathered in the nation’s capital, and from the steps of the Lincoln Memorial Dr. King delivered his “I Have a Dream” speech.

Dr. King’s renown continued to grow as he became Time magazine’s Man of the Year in 1963 and the recipient of the Nobel Peace Prize in 1964. In late 1967, Dr. King initiated a “Poor People’s Campaign” designed to confront economic problems that had not been addressed by earlier civil rights reforms. The following year, while supporting striking sanitation workers in Memphis, he delivered his final public speech, “I’ve Been to the Mountaintop.” The next day, April 4, 1968, Dr. King was assassinated as he stood on the balcony of a local motel.

On Jan. 20, 1986, America held its first national holiday in memory of Dr. King, the first African-American to be so honored.