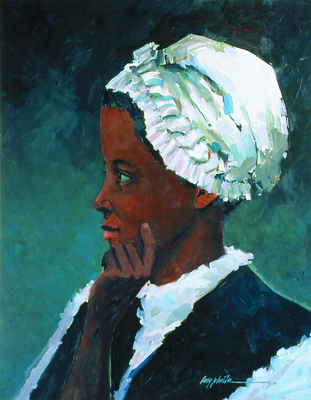 A young girl believed to be between the ages of six and eight came to America aboard a slave ship in 1761. This young girl, Phillis Wheatley, was believed to have come from Ethiopia or Senegal, West Africa, and left a substantial mark on American history. She was to overcome the inhumane institution of slavery to become one of this country’s greatest poets and the first black American woman to publish a book.

Luckily for Phillis Wheatley she was purchased by John Wheatley, a wealthy merchant tailor, for his wife Susannah. Once in the Wheatley home, Phillis was treated as a daughter and assigned chores relative to the status of a lady. Phillis exhibited an astounding ability to learn and in just sixteen months she mastered the English language. At the age of fourteen, she began to write poetry and quickly gained the attention of the most distinguished Bostonians.

In 1770, only nine years after her arrival to this country, she published her poem, “On the Death of the Rev. Mr. George Whitefield,” which gained the attention of the Countess of Huntington in England. Three years later, Phillis visited England and before she left, the Countess arranged to have a volume of her poems published. In 1773, the first book of poems by an American black woman was published, Poems on Various Subjects, Religions and Moral.

In 1774, shortly after this historic occasion, her mistress, Mrs. Susannah Wheatley, died. Four years later, after the death of her master, Mr. Wheatley, Phillis became a free woman, leading to hard times and poverty. One month after the death of John Wheatley, she married John Peters. This marriage did not improve Phillis’ circumstances and she was forced to work as a servant. She bore three children. All three died shortly after birth, and Phillis herself died within a few hours of her third delivery on December 5, 1784.