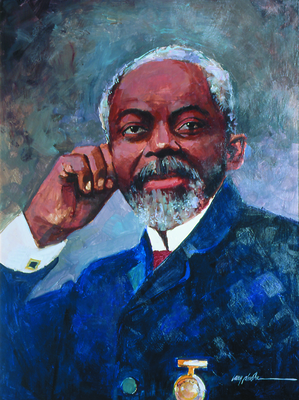 William Harvey Carney, famed for the words “The Old Flag never touched the ground!” and hero of the 54th Massachusetts Regiment in the Civil War, was born in Norfolk, Virginia, and attended a private school that was conducted secretly by a minister. His home, which is now officially called the “Sergeant Carney Memorial House,” has become a shrine. Carney himself is depicted in the Saint-Gaudens monument which immortalizes Colonel Robert Gould Shaw and his intrepid colored troops. Carney’s features are represented on the face of one of the soldiers following his commander. The flag rescued by Carney is enshrined in Memorial Hall.

Early in 1863, William Carney, then 23 years old, enlisted in the Morgan Guards, which became part of the 54th Massachusetts Regiment. In July 1863, the regiment was engaged in the disastrous battle at Fort Wagner. When Carney saw that the color sergeant, the soldier who carried the flag, had been wounded, he rescued the flag, going through a volley of enemy bullets. Delivering it to a squad of his own regiment, he shouted, “The Old Flag never touched the ground!” Then Carney fell to the ground in a dead faint, weak from the wounds that he had received. Mustered out of the army in 1864, he went to New Bedford, Massachusetts before going to California. In 1870, he returned to New Bedford and became one of the four men employed as letter carriers. After 31 years in the postal service, he retired in 1901, then spend his last years as an employee at the state capitol in Boston.

Carney was in great demand as a leader of Memorial Day parades and as a speaker at patriotic events. In 1904, he was the Memorial Day orator at the Shaw Monument on Boston Common.