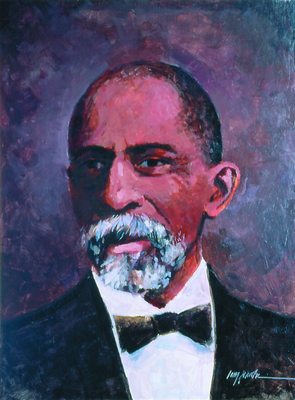 Lewis Temple was the inventor of a whaling harpoon, known as “Temple’s Toggle” and “Temple’s Iron” that became the standard harpoon of the whaling industry in the middle of the 19th century. Lewis Temple was a skilled blacksmith, not a whaler. He had never even been to sea. Temple was born a slave in Richmond, Virginia, in 1800, and arrived in New Bedford, Massachusetts in 1829. By 1836, Temple was one of the 315,000 free black people in the United States and a successful businessman who operated a whale craft shop on the New Bedford waterfront. Temple, a well-known citizen of New Bedford, was working as a blacksmith to support his wife, Mary Clark, whom he married in 1829, and their three children. In 1845, Temple was able to open a larger store.

The procuring of whale oil, whale meat and by-products was a leading industry in Massachusetts and New England. Whaling also provided thousands of jobs for seamen, many of whom were black. Based on conversations with the whalers who came to his shop to have their whaling tools made and to buy harpoons, Temple probably learned that many whales escaped, since the harpoons used at the time were not particularly effective in holding a struggling whale.

In 1848, Lewis Temple invented a new type of harpoon, with a moveable head that prevented the whale from slipping loose. The Temple Iron was more effective than any other harpoon that had ever been manufactured. The head on Temple’s harpoon became locked in the whale’s flesh, and the only way to free the harpoon was to cut it loose after the whale was killed.

Initially, whalers did not accept Temple’s harpoon. However, after some trials, most whaling captains were convinced that Temple’s “Toggle Iron” was far superior to the ordinary barbed head harpoon. Lewis Temple never patented his invention, but was able to make a fairly good living from his harpoon sales. This sum, of course, was nowhere near the fortune he could have made if he had patented his invention. Temple was able to buy the building next to his shop and, in 1854, arranged for construction of a blacksmith shop near Steamboat Wharf.

Temple accidentally fell one night while walking near his new shop construction site. He never fully recovered from his injuries. Temple was unable to return to work and money became scarce for his family. He died destitute in May 1854, at the age of 54. When his estate was settled, practically everything he owned was used to pay off his debts. Clifford Ashley said in his book, The Yankee Whaler, that Temple’s harpoon was “the single most important invention in the whole history of whaling.”