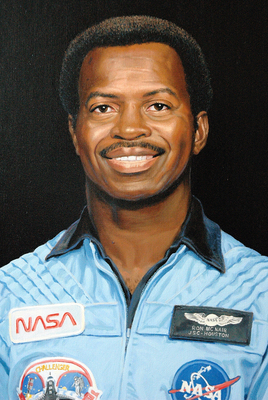 Ronald E. McNair was selected as an astronaut candidate by National Aeronautic Space Administration (NASA) in January 1978. He received a Bachelor of Science degree in physics from North Carolina A&T State University in 1971 and a Doctor of Philosophy in physics from Massachusetts Institute of Technology in 1976. Following graduation, he became a staff physicist with Hughes Research Laboratories in Malibu, CA. He first flew as a mission specialist on STS 41-B which launched from Kennedy Space Center, Florida, on Feb. 3, 1984. The flight accomplished the proper shuttle deployment of two Hughes 376 communications satellites, as well as the flight testing of rendezvous sensors and computer programs. This mission marked the first flight of the Manned Maneuvering Unit and the first use of the Canadian arm (operated by McNair) to position EVA crewman around Challenger’s payload bay. Included were the German SPAS-01 Satellite, acoustic levitation and chemical separation experiments, the Cinema 360 motion picture filming, five Getaway Specials, and numerous mid-deck experiments - all of which Dr. McNair assumed primary responsibility. Challenger culminated in the first landing on the runway at Kennedy Space Center on Feb. 11, 1984. With the completion of this flight, he logged a total of 191 hours in space.