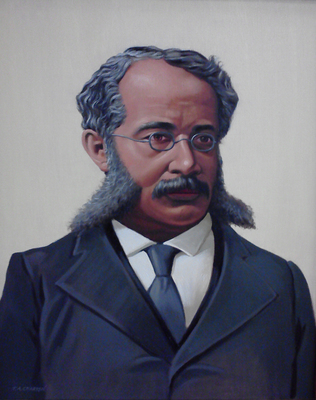 George Lewis Ruffin was born in Richmond, Virginia. He moved with his family to Boston in 1853 to protest Virginia’s ban on African Americans learning to read. After finishing school, Mr. Ruffin worked in a barbershop while he studied law. He graduated from Harvard Law School with the distinction of being the first black graduate of a law school in the United States. He was one of the first African Americans to be admitted to the Massachusetts bar, and he became the first African- American judge in Massachusetts. Mr. Ruffin was elected to the House of Representatives and served on the Common Council.

In addition to his successful legal career, Mr. Ruffin and his wife, Josephine St. Pierre Ruffin, were active in the fight against slavery and the struggle for justice.

In celebration of his work and life, the Justice George Lewis Ruffin Society was founded in 1984, and supports minority professionals in the Massachusetts criminal justice system.