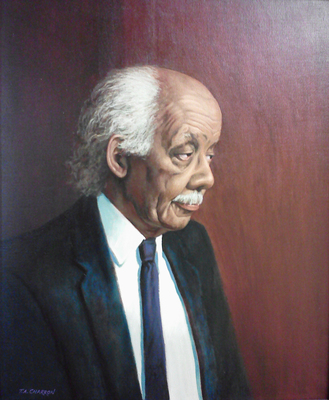 For nearly 90 years, Mr. Crite was rarely seen without a pencil and pad in hand. Having given his life to art, he was especially well known for narrative paintings of the religious and social life of lower Roxbury/South End, his depictions of Christian themes in contemporary-often local-settings, and his ecclesiastical subjects on gold leaf. He produced an enormous body of work that will sustain his legacy as a painter of the American scene. Over his career, he inspired generations of younger artists who bestowed on him the honorary title of the Dean of African American Artists in New England. His place in American art is evidenced by his inclusion in the collections of the Museum of Fine Arts, Museum of the National Center of Afro-American Artists, Smithsonian Institution, Museum of American History, Boston Athenaeum, Phillips collection, Corcoran Gallery of American Art, Boston Public Library, and Newark Museum. His many one-person exhibitions included Allan Rohan Crite: Artist-Reporter of the African American Community (2001) at the Frye Art Museum in Seattle. Mr. Crite strove to make his art accessible and this desire led him to publish two books of ink-brush drawings: Were You There When They Crucified My Lord (1944) and Three Spirituals (1948). Among the last of his major projects was his remarkable Book of Revelation, in which he created illustrations for the last book of the Bible.

In 1993, Mr. Crite married Jacquelyn Cleveland Cox, and they laid the groundwork for launching the Allan Rohan Crite Research Institute and Library.