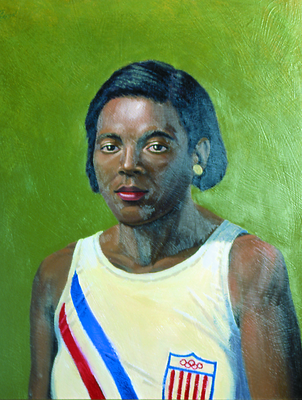 Louise Stokes Fraser was a champion athlete in the sports of track and field and bowling. She qualified for both the 1932 Olympics of Los Angeles and the 1936 Olympics held in Berlin. Following her retirement from track and field, Louise became a professional bowler. The eldest of six children, Louise was born in 1913 in Malden, Massachusetts, to William Stokes, a gardener, and Mary Wesley Stokes, a domestic. Louise began running while a student at Beebe Junior High in Malden. Because of her quickness, one of her basketball teammates suggested she join the Onteora Track Club, sponsored by William H. Quaine, a postal worker, former athlete, and the park commissioner of Malden. Within a couple of years, Louise soon began to win the sprints and the jumping events.

While a student at Malden High School, Louise set many records in track in field, while also playing center on the girls basketball team and singing in the choir at Eastern Avenue Baptist Church. In September 1931, while a junior at Malden High School, she was awarded the James Michael Curley Cup for outstanding women’s track performance of the year. At the Mayor’s Day Races, Louise set a New England record of 12.6 in the 100-meter race, second place in the 50-yard dash, and third in the broad jump. Four months later, in December, at a YMCA meet held in Roxbury, MA, she tied the world record for women in the standing broad jump at 8′ 5 3/4″. Louise won the National Junior 40-yard dash championship and defended her broad jump record in Princeton, New Jersey in early 1932, and went on to win the New England Championship in the high jump and finish second in the 100-yard dash in June at a Boston Parks Department meet.

At the 1932 Olympic Trials at Northwestern University, Louise finished third in the 100-meters and earned a place on the women’s 400-meter relay team in Los Angeles. Louise Stokes and Tydie Pickett served as the first two African-American women to qualify for an Olympic team. At the 1932 Olympics in Los Angeles, however, two white women replaced Stokes and Pickett. They sat and watched while the American women set a world record in the 400-meter relay and won the gold medal.

After the 1932 Olympics, Louise continued competing. In 1933 she set a New England record and became the NEAAU Champion in the 40-yard dash in 5.6 seconds. That summer she won the 50-meters in 6.6 seconds and earned second place for the Onteora Club even though she was the only Onteora participant. Over the next three years, Louise retained the 50-meter title and added NEAAU titles in the 25-yard sprint, 100-meters, 100-yards, 200-meters, 220-yards, broad jump, and high jump.

At the 1936 Olympic Trials, held at Brown University, Louise placed 5th but made the team again as a member of the 400-meter relay. Once in Berlin, Germany, however, she received the same treatment as in 1932. Upon arriving at the track, Louise was stunned to learn that she had been replaced with a white runner. She again sat in the stands and watched her teammates win the gold medal. Nonetheless, upon her return she received a hero’s welcome in Malden.

After the 1936 Olympics, Louise Stokes retired from running, worked as an elevator operator, and became a professional bowler. She founded the Colored Women’s Bowling League in 1941 and for three decades won many bowling awards. In 1944 she married Wilfred Fraser, a cricket star from the Caribbean, gained a stepdaughter, Shirley, and had one son, Wilfred “Wolfie” Jr. She then worked for 18 years as a clerk for the Massachusetts Department of Corporations and Taxation, retiring in 1975. Louise held memberships in the Olympians Club and the Onteora Track Club of Malden. The New England Amateur Athletic Union honored her in 1974 with “Louise Fraser Day” at Boston University. Louise Stokes Fraser died on March 25, 1978.

In November 1980, the field house at Roosevelt Park in Malden was dedicated in Louise Stokes Fraser’s memory, and in September 1987, a statute was dedicated in her honor in the Malden High School courtyard. Bridgewater State University celebrates the important contributions of Louise Stokes Fraser as one of the first two African-American women to earn a place on an U.S. Olympic team through the Hall of Black Achievement.