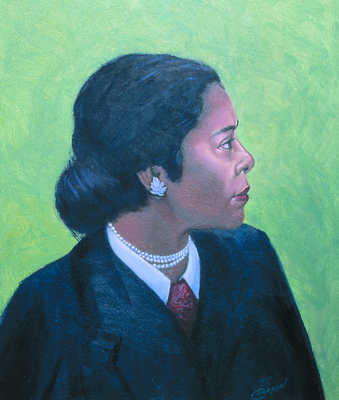 Ann Lane Petry was the first Black female author to address the problems African-American women face as they struggle to cope with life in the inner city. Her novel, The Street, published in 1946, was the first book by an African-American woman to sell over 1.5 million copies. Ann Lane was born into a middle class family in 1908 in Old Saybrook, Connecticut, where her father, Peter Lane, opened a pharmacy in 1902. Her mother, Bertha James Lane, was a hairdresser, chiropodist, and entrepreneur. Her family was one of the few Black families in the white, shoreline community. At school Ann Lane had a reputation as a voracious reader. She graduated with a Ph.D. in Pharmacology from the University of Connecticut School of Pharmacy, following in the footsteps of her aunt, Anna Louise James who graduated from Brooklyn College of Pharmacy and who became Connecticut’s first female druggist. Ann Lane worked as a pharmacist for several years in her father’s business. All the time she was mixing prescriptions, she was observing her customers and writing short stories on the side, which was the basis for her book Country Place.

In 1938, Ann Lane married George Petry, a mystery writer. The couple moved to Harlem and her life changed dramatically. Ann did not follow convention or tradition by fading into the background or living in her husband’s shadow. She left the field of pharmacology and began her writing career in earnest. She secured a job writing advertising copy for the influential Black newspaper The Amsterdam News. She later worked as a reporter and editor of the women’s pages of the People’s Voice, a rabble-rousing newspaper founded by Adam Clayton Powell, Jr., the future Congressman from Harlem. This work led to her deep immersion in Harlem life.

During the period 1938 to 1944, Mrs. Petry published her short stories in The Crisis, the journal of the National Association for the Advancement of Colored People; Opportunity, the magazine of the Urban League; and other periodicals. She also wrote articles on Harlem describing both its squalor and its wealth. She also worked in a special after-school program in the heart of Harlem and later wrote about latchkey children being raised in foster homes or by their mothers, who were working.

In 1943, in The Crisis, she wrote “On Saturday, the Sirens at Noon” which won her a $2,500 Houghton-Mifflin literary award that led to a contract for The Street. The Street was published to critical and popular acclaim in 1946. A runaway success, it sold 1.5 million copies – the first novel by a Black woman to have achieved this distinction – and secured Mrs. Petry’s literary reputation. During the following year, she also distinguished herself as a writer of short fiction, winning critical accolades for her story, “Like A Winding Sheet,” which was published in Best American Short Stories of 1946. She followed the success of The Street with two other novels, Country Place (1947), and The Narrows (1953).

Although she ached to be a published writer, when The Street made her the best-selling Black American woman novelist of her day, the celebrity it brought repulsed her. The financial success of The Street provided Mrs. Petry and her husband the means to purchase a 200-year old house in Old Saybrook, where they returned in 1948. She continued to write. After the birth of her daughter, Elisabeth, her focus was on books for children and young adults. Ann’s goal in writing historical novels for young readers was to nurture their knowledge of and pride in the achievements and humanity of Black women throughout history. She wrote: The Drugstore Cat (1949), Harriet Tubman: Conductor on the Underground Railroad (1955), and Tituba of Salem Village (1964). She also published a collection of her short stories, Legends of the Saints (1970), and another collection, Miss Muriel and Other Stories (1971).

The reissue of The Street in the mid 1980s triggered another round of critical acclaim by a new generation of readers and renewed attention by academics. In the early 1990s there was a flurry of activity around Mrs. Petry’s work. She was given a Connecticut Arts Award in 1992 and a symposium on her writings was held at Trinity College in 1992. Mrs. Petry was appointed a visiting professor of English at the University of Hawaii (1944-45) and she lectured widely throughout the United States. Her contribution to literature has been acknowledged by membership in the Author’s Guild and American P.E.N. (Association of Poets, Playwrights, Editors, Essayists, and Novelists), and by honorary doctorates from several colleges and universities. When Mrs. Petry died in 1997 in Old Saybrook, a short distance from the James Pharmacy, which still bears her aunt’s name. She was widely regarded as a pioneering figure in the twentieth-century African-American writing.