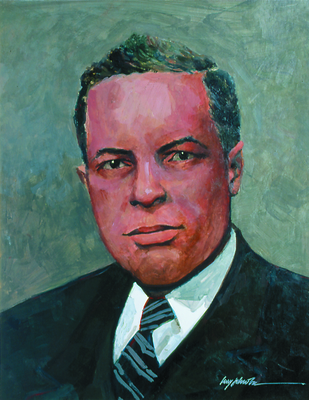 Born June 14, 1897 in the Cape Verdean Islands, Alfred J. Gomes came to New Bedford at the age of seven and was educated in the New Bedford Public Schools. He worked to finance his own college education and graduated from Boston University Law School in 1923. Having attained this level of education, he became one of the first Cape Verdean-born Americans to receive a doctor of jurisprudence degree.

Returning to New Bedford after graduation, Gomes became one of the city’s most prominent civic and community leaders. He was especially concerned with promoting the aspirations and betterment of the Cape Verdean people in this country and in his homeland.

Attorney Gomes’ accomplishments are vast and substantial. Some of his most significant activities and contributions include: serving as a member of the New Bedford Institute of Technology Board of Trustees, now known as the University of Massachusetts-Dartmouth; founding the Nantucket Lightship Memorial Scholarship Fund/The Seaman’s Memorial Scholarship Fund, which assisted many Cape Verdean-Americans to achieve academic prominence; helping to establish the Verdean Veterans Achievements Awards; serving as a member of the Fall River Diocesan School committee, for which he received the Marian Award for his works of charity; serving on the New Bedford Boys’ Club Board of Directors for more than forty years; and organizing the first Cape Verdean Boy Scout troop at the Cape Verdean Benefit Association.

Alfred J. Gomes was an extremely successful fundraiser and philanthropist. In 1942, he organized a Cape Verdean Relief Fund and succeeded in raising four thousand dollars for food and clothing for the needy, and in 1956 he helped to organize the Our Lady of Assumption Fund Drive. In addition to fundraising and financial support, he organized and donated much time to promoting Cape Verdean models, instrumentalists, dancers and vocalists, presenting them in exhibits and festivals. He was considered one of the prolific historians and researchers of Cape Verdean history and culture.

On November 7, 1974, Attorney Alfred J. Gomes died. His whole life was one of dedication and service to his fellow citizens, with particular concern for the youth of New Bedford.