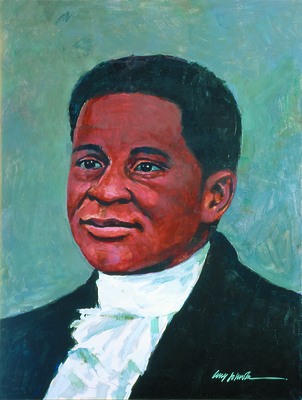 Crispus Attucks, one of the first men to die for American freedom, was a fugitive slave who had escaped from his master and had worked for twenty years as a merchant seaman. When Samuel Adams, prominent leader of the struggle against British domination of the American colonies, called upon the dock workers and seamen in the port of Boston to demonstrate against the British troops guarding the customs commissioners, Crispus Attucks responded to the plea. Aroused by Adams’ exhortations, a group of 40 to 50 patriots, armed with clubs, sticks and snowballs, approached the British soldiers. Attucks was apparently in the front of the line of the aroused citizens, urging them on. Suddenly there was a terse order – “Fire!” The British troops responded with a barrage of rifle fire.

Crispus Attucks was the first to fall in the celebrated “Boston Massacre” of 1770. Four other Americans died that night from the action. Samuel Adams used the incident to incite the colonists to further rebellion. Although only five people were killed, Adams termed it a “massacre” of innocent citizens by the tyrannical mother country. Paul Revere published a poem and a drawing of this famous incident in the Boston Gazette on March 12, 1770. Writers who omit Crispus Attucks’ name from the accounts of the American Revolution might as well dismiss the “Boston Massacre” as an irrelevant incident in the struggle for American independence.