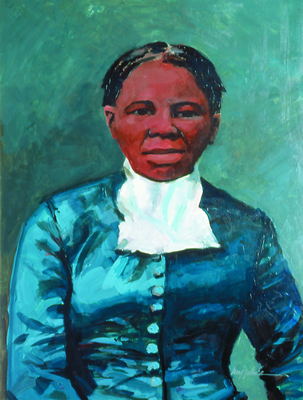 Harriet Ross Tubman, daring woman conductor on the Underground Railroad, escaped from slavery and then dared to return to her former master’s plantation to help others escape to freedom. One of eleven children, she was born in Dorchester County, Maryland. In 1857, at great personal risk, she helped three of her brothers and sisters escape from slavery. Later, she liberated her mother and father.

Harriet’s early life on the slave-breeding plantation was a typical one, with the exception of an incident which made her incapable of being a “breeder.” As a young girl, when she had been hired out as a field hand, she received a severe blow on the head from a weight that had been thrown at another slave by an enraged overseer. The damage from the blow caused her to suffer from “sleeping seizures.”

Around 1844, she married a free Negro man named John Tubman, but she remained a slave. When the master of her plantation died in 1849, the rumor spread among the slaves that they were to be sold in the Deep South. Harriet and two of her brothers decided to escape. Always in dread of recapture, the brothers returned, but Harriet fixed her gaze on the North Star as a guide. With sheer determination, walking by night and hiding by day, she finally arrived in Philadelphia.

Two years later, she returned to Maryland for her husband, but he had married another woman. This disappointing news gave her increased determination to help others escape bondage. She had already rescued a sister and brother in December 1850, and in December 1851, she had successfully led a party of eleven into Canada. By now, Harriet had developed the hard and dauntless characteristics of a “trail boss.” If the fugitive became faint-hearted and wanted to return, she did not hesitate to level her pistol at the victim, saying “You go on or die.” Her reputation as a conductor on the Underground Railroad is best expressed in her own words: “…I nebber run my train off de track and I nebber los’ a passenger.”

It was in 1857 that she brought her aged parents to freedom and settled them in Auburn, New York, where she purchased a modest home from William H. Seward. The antislavery workers of New England and New York helped her raise the funds for the home, which she turned into a home for the elderly Negroes after the War. She remarried, and some authorities speak of her as Harriet Tubman Davis.

William H. Seward tried to get her a government pension from Congress for her heroic and dauntless courage in the cause of freedom. A tablet commemorating her work was unveiled in Auburn on June 12, 1914, by the Cayuga County Historical Association. Harriet Tubman trusted in God on her many journeys into and out of the South. Prayer was her constant companion and consolation whenever she was in danger.