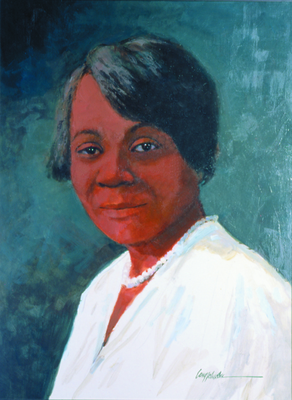 The first African-American woman hired as a public school teacher in New Bedford, Massachusetts, Elizabeth Carter Brooks was committed to equality. The child of a former slave, she studied diligently at New Bedford High School, the Swain Free School of Design, and the Harrington Normal Training School in New Bedford.

In 1895, as an outgrowth of the First National Conference of the Colored Women of America, the National Federation of Afro-American Women was formed. Mrs. Brooks, then living in Brooklyn, New York, where she taught school, became the first recording secretary. She helped form and then served as president of the Northeastern Federation of Colored Women’s Clubs. Mrs. Brooks would later become the fourth president of the National Association of Colored Women – a post she held from 1908 until 1912.

It was always her dream to provide a home for New Bedford’s elderly citizens. She saw her dream realized in 1897 when she opened the New Bedford Home for the Aged. She served as president of the city’s first organized home for the elderly and served the home for many years thereafter. In 1918, Mrs. Brooks was asked by the War Department to plan and supervise the building of the Phillis Wheatley YWCA in Washington, D.C.

Elizabeth Carter married Bishop William Sampson Brooks in 1930 and relocated to Texas where she lived until his death in 1934. On June 14, 1934, she was awarded the honorary doctor of law degree from Wilberforce University in Wilberforce, Ohio. She returned to New Bedford and became active as president of the New England Conference Branch Woman’s Mite Missionary Society. She also presided over the regional conference of the NAACP as well as headed its New Bedford Branch.

The Martha Briggs Educational Club was a beneficiary of Carter Brooks’ generosity when, in 1939, she loaned them the money to purchase the home of Sgt. William H. Carney, for historical purposes. The home still serves as a memorial today. Following her death in 1951, she was honored by New Bedford when the Elizabeth Carter Brooks School was dedicated in her name.