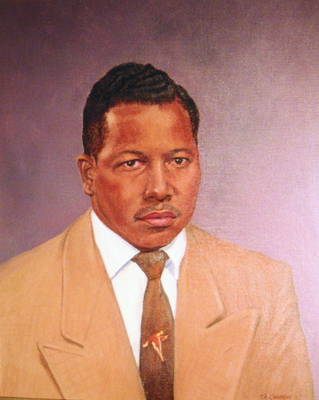 John P. Gonsalves, popularly known as “Joli,” was at once a singer, a community activist, a folklorist, a man of the people. He was concerned with not only spreading the lore of the Cape Verdean, but interested himself in the cultures of others.

After serving in World War II, he entered the Arlington Academy of Music. Upon graduating, he realized that opportunities for his musical career were best in New York. He and a friend founded the Joli Tinker Publishing Company and Gon Joe Publishing Company where Joli wrote musical arrangements for many popular singers.

In 1966, he went on to sing with the Leonard DePaur Infantry Chorus, a group that was selected by the U.S. State Department to tour 14 countries in Africa. While in Liberia, Joli wrote a song that was used as a secondary national anthem. He received a citation from president William F.S. Tubman and was also knighted for his cultural contributions.

Back in the United States, he worked with Harry Belafonte. On Dec. 22, 1967, while driving home after a concert performance, he had a serious accident which, after several surgeries, resulted in the loss of sight in one eye.

Joli came home to New Bedford, but he never gave up. He started a record company called “LOTA DISCO” (Lota being a nickname for his mother, Carlotta). He became Director of Community Involvement for Model Cities, he worked for WNBH as a newscaster, he was producer and moderator for the first Cape Verdean television program on Channel 6.

He was a member of the first Cape Verdean All-Star Orchestra touring the United States, performing as both a vocalist and a percussionist. Through the years, Joli performed at numerous events including the Annual Christmas Dinner for the Elderly at St. John’s Church; the “Saudade” at the University of Massachusetts at Dartmouth; and a joint concert with famed folk singer Pete Seeger in Westport.

He was proud that he was successful in his efforts to have a new school named for his mentor, Attorney Alfred J. Gomes, a historian and keeper of Cape Verdean archives. Joli continued singing wherever he was needed. He founded the Cape Verdean Cultural Center where he storied the many informative material he had amassed through the years to share with anyone who was interested.

Among those who have visited the center were college students seeking information for papers and others who were interested in Cape Verdean culture as well as African-American and Native-American history.

Joli was asked to visit schools in New Bedford, Roxbury, Cape Cod, Martha’s Vineyard and Nantucket. He had a wonderful rapport with youngsters and they responded well to his story telling and even learned to seek Cape Verdean ditties he taught them. He began a program of understanding between third-graders in a Cape Verdean bilingual class at Gomes School and another third-grader at Cape Cod Academy in Osterville with the cooperation of the two teachers. The children exchanged letters, came to visit and were entertained by him. His goal was to teach and understand the diversity of people, beginning with children.

Trained as a commando during the war, he was present at the liberation of the Buchenwald concentration camp in Germany. It was an experience he never forgot and, as a consequence, he participated in each year in the Holocaust Celebration at the synagogue. His repertoire also included singing in Hebrew.

A tree-lined street in his hometown of New Bedford has been posthumously named “Joli Gonsalves Memorial Way” through the efforts of the New Bedford City Council and the concordance of the mayor. At the ceremony, the main speaker referred to John P. “Joli” Gonsalves as “an icon in the community.”