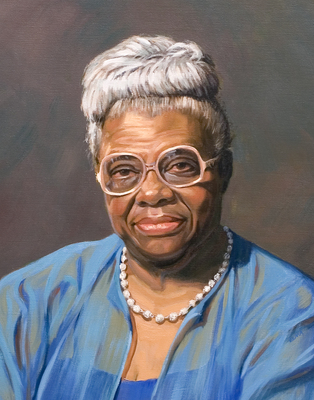 The daughter of Barbadian parents who immigrated to Boston in the early 20th century, Elma Ina Lewis founded the Elma Lewis School of Fine Arts (ELSFA) for black youth in 1950 before foundations and corporations were interested in such projects. The school, which emphasized music and dance, produced many students who found work in Broadway musicals and who built professional careers in the theater.

In 1967, she launched the Elma Lewis Playhouse-in-the-Park, which presented such greats as Odetta, Billy Taylor and Duke Ellington. In 1968, following a national conference of black creative intellectuals in Chicago, Miss Lewis founded the National Center of Afro-American Artists (NCAAA), which offered professional programs in the visual and performing arts that paralleled the divisions of ELSFA. Her goal was to bring together in one complex the best in teaching and professional performance, while affirming a populist commitment to accessible arts and ethnic heritage.

Under Miss Lewis’ direction, ELSFA built a unique teaching program emphasizing character-building and multidisciplinary arts instruction integrated through performance and exhibitions. With a staff exceeding 100, ELSFA offered rigorous classes in all of the arts to hundreds of boys and girls ages 6 to 12, as well as to teens and adults. It also taught all of the arts and technical theater in Norfolk Correctional Institution, where in cooperation with the prestigious Little, Brown Publishers, inmates released Who Took the Weigh, a book of verse and essays.

Extraordinary teachers of superb professional standing – including African percussionist M. Babatunde Olatunji; dancer-choreographers Talley Beatty, Billy Wilson and George Howard; along with brilliant Bostonians such as musician/composer John A. Ross, Fashion Carousel team Gus and Lucy and dramatist Vernon Blackman, taught at the school where most students paid minimal fees. NCAAA professional companies in dance and music, often drawing on ELSFA’s students, flourished, performing in Boston, the Caribbean, Brazil, Senegal and Europe. The creative mix was intoxicating, and from it came many exciting productions, including the NCAAA’s well-known production of Langston Hughes’ Black Nativity.

For the visual arts, Miss Lewis enlisted the help of Boston’s Museum of Fine Arts in developing and sustaining the NCAAA’s Museum under the direction of Edmund Barry Gaither. The relationship produced 10 jointly sponsored MFA exhibitions featuring the finest in African and African-American visual arts. In 1986, fire interrupted teaching and performing arts programs of the NCAAA, however, the museum continued operating on a separate site. Plans are being made to restore the teaching and performing arts divisions of the NCAAA, expand its museum and endow its future.

Miss Lewis’ work brought many famous figures to Boston and to her students, including pugilist Muhammad Ali; actors Ossie Davis and Ruby Dee; musicians Thomas Dorsey, Mary Lou Williams and Eubie Blake; and activist Leon Sullivan. Eartha Kitt, Nina Simone and many stellar personalities made a point of visiting her center. During Boston’s 350th anniversary celebrations, she had Dakar, Senegal, invited to the Great Cities of the World Conference and co-presented “Contemporary Art of Senegal” at the Museum of Fine Arts, as well as “Poetry of the Negritude Movement” at the French Library.

Miss Lewis hosted the first delegation from the People’s Republic of China to visit the United States, during the Nixon presidency, and later co-hosted United States Ambassadors to African nations. Miss Lewis, who possessed an extraordinary will, inspired by Marcus Garvey’s philosophy of self-reliance and nationalism, visualized an artistic and cultural center that would empower and dignify black creative and intellectual development and celebrate black artistic genius on the world stage. Her life’s work was to establish this dream, through her teaching and through the institutions that she founded.

Miss Lewis’ dream was extraordinarily powerful. Tens of thousands were touched directly by her school and the NCAAA performances locally, nationally and internationally. Additionally, her vision and work commanded national respect, as demonstrated by honors such as the Presidential Medal for Art presented to her by President Ronald Reagan, and her designation as a Fellow in the first group of John D. and Catherine T. McArthur Foundation Awardees.