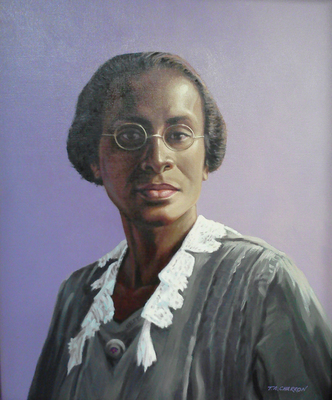 While a student here, she was a member of the women’s basketball team in 1910 and 1911 and performed in school plays in both of those years. Following her graduation in 1912, Ms. Onley was hired by the New Bedford school system to teach elementary education.

She later married Rev. Arthur J. Spratley, pastor of the Union Baptist Church in New Bedford and became active in church work. She held the post of president of the Women’s Auxiliary of the United Baptist Convention of Massachusetts and Rhode Island for many years. She also was one of the founders of the Martha Briggs Literary Club and a member of the Martha Briggs Educational Club of New Bedford.

After several years in New Bedford, the Spratleys moved to Boston, where Rev. Spratley became one of the founders of Concord Baptist Church. Mrs. Spratley resumed teaching in Boston public schools. She was very active in numerous civic groups such as the League of Women for Community Service, Boston Teacher’s Alliance, Boston Elementary Teachers Club and the Delta Omicron Chapter of the Zeta Phi Beta Sorority.

After the death of her husband in the early 1960s, Mrs. Spratley returned to New Bedford, the home of her grandparents who were active in the Underground Railroad and the abolitionist movement. She died in 1980 at the age of 91. She had a daughter, Joan M. Spratley Fisher of St. Louis, who was formerly a commissioner of the Massachusetts Hall of Black Achievement.

In 1987, the Hall of Black Achievement was established and the first formal inductions took place in February 1988. Each year, the hall presents the Mary Hudson Onley Achievement Award and Onley Medallion to a living individual who has made significant contributions to society or within his or her field.