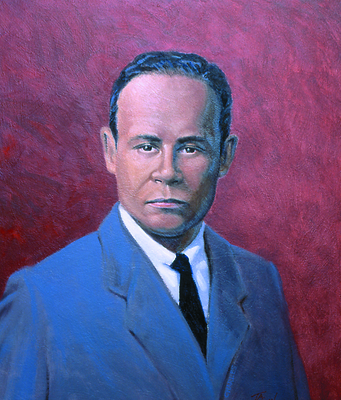 The man, for whom Charles R. Drew University of Medicine and Science in Los Angeles is named, was a brilliant Black physician, famous for his pioneering work in blood preservation. Born in Washington, D.C. on June 3, 1904, his life ended in an auto accident just two months before his 46th birthday. The intervening years were crowded with achievements, learning and sharing his knowledge to benefit mankind. In 1926 he graduated from Amherst College in Massachusetts, where his athletic prowess in track and football earned him the Mossman trophy as the man who contributed most to athletics for four years.

Dr. Drew taught biology and served as coach at Morgan State College in Baltimore before entering McGill University School of Medicine. As a medical student, he became an Alpha Omega Alpha Scholar and won the J. Francis Fellowship, based on a competitive examination given annually to the top five students in the graduating class. In 1933, he received his M.D. degree. His first appointment at Howard University was as faculty instructor in pathology from 1935-36, and later as an instructor in surgery and an assistant at Freedmen's Hospital, a federally operated facility associated with Howard.

Awarded a two-year Rockefeller Fellowship in surgery in 1938, Dr. Drew began postgraduate work and earned his Doctor of Science in Surgery degree at Columbia University. His doctoral thesis, "Banked Blood: A Study in Blood Preservation" was based on an exhaustive study of blood preservation techniques, which began at McGill University. It was while he was engaged in research at Columbia's Presbyterian Hospital that his ultimate destiny in serving mankind was shaped. The military emergency of World War II, demanding a vital need for information and procedures to preserve blood, made Dr. Drew the "man of the hour". As the European war scene became more violent, and the need for blood plasma intensified, Dr. Drew was selected to become full-time Medical Director of the Blood for Britain Project. In February 1941, he was appointed Director of the first American Red Cross Blood Bank in charge of blood for use by the U.S. Army and Navy. Dr. Drew resigned his position with the American Red Cross Blood Bank after the War Department sent out a directive stating that blood taken from white donors should not be mixed with that of Black donors. This issue caused widespread controversy.

In 1939, Dr. Drew married Lenora Robbins. They had four children: Bebe, Charlene, Rhea, and Charles. In 1944, he received the Spingarn Medal from the NAACP for his work on British and American Projects. Virginia State College conferred upon him an honorary Doctor of Science in 1945, and his alma mater Amherst conferred the same degree in 1947.

On April 1, 1950, Dr. Drew was motoring with three colleagues to the annual meeting of the John A. Andrews Clinical Association in Tuskegee, Alabama, when he was killed in a one-car accident. The automobile struck the soft shoulder of the road and overturned. Dr. Drew, who was severely injured, was rushed to a nearby hospital in Burlington, North Carolina. It was, however, too late to save him. Dr. Charles R. Drew died at 8 a.m. on April 1, 1950. Dr. Charles Drew did not make much money but he was a generous man. Dr. Drew made what he considered his greatest contribution to medicine: teaching and helping to certify hundreds of Black surgeons.