The First Parish of East Bridgewater was established on December 14, 1723, and originally named the East Parish of Bridgewater (the town of East Bridgewater was not incorporated until 1823 when it broke away from Bridgewater). The first minister, Reverend John Angier, a Harvard University graduate, was ordained in 1724 and the first meeting house was constructed the same year. In 1754, while Angier was still minister, a second meeting house was constructed close by to replace the original. Upon completion the original meeting house was removed from the site. In 1767 John Angier’s son, Samuel Angier, was ordained as colleague pastor of the East Parish.

Construction on a third meeting house began in 1794 and was completed by 1795. It was constructed on nearly the same location as the previous two. This building was remodeled in 1850 and is still standing today. The original steeple was destroyed by hurricane in 1938 and replaced in 1968. During the 1970s the building’s chandelier and Paul Revere Bell were sold.

Rev. Paul John Rich was ordained as minister in 1962 and would remain until 1978. During these years the Church was continually a hot topic in East Bridgewater. Some of these issues included ownership of the town Common, changing the town’s name, controversial art exhibits and displays, newly created museums and organizations (five small museum buildings known collectively as the Standish Museums), and a court case centered around Rev. Rich embezzling money from Church funds. Rich was the last minister of the Church and the physical building was relinquished in the early 1980s. Members would continue to meet for some time at other locations. 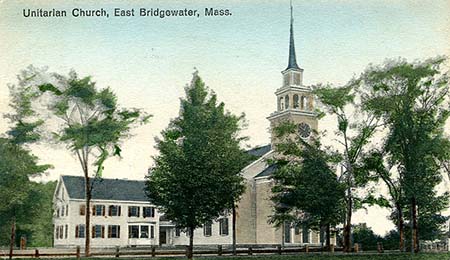