Reminiscences of a Building 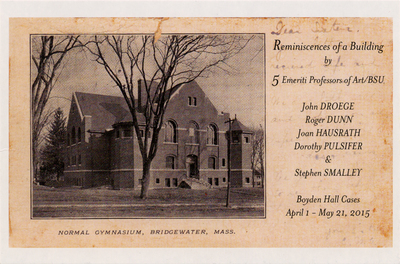 The works by the five BSU emeriti professors of art attempt to depict their personal reminiscences of the university's oldest (1905) building. Since January 1976, the building has been the home for the art department, a program once housed in the basement of Boyden Hall.

The venerable building was originally constructed as a gymnasium serving both the institution and the community. The building would later serve as a school library, followed by its use as a home for the humanities faculty and general classroom facility. To this day, stories of the building's ghostly presences are recounted and its architectural heritage has been linked, perhaps faintly, to the influences of the architect Henry Hobson Richardson.

It is worth noting that the 5 emeriti professors participating in this intimate exhibit cumulatively taught for 175 years at Bridgewater, particularly poignant as BSU celebrates its 175th. anniversary.