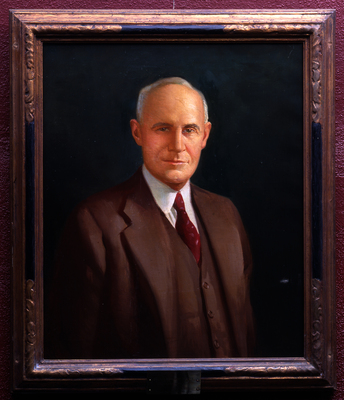 Dr. Zenos E. Scott (1877-1965), who came to the college as the second president in 1933 after a successful career in education that included service as Assistant Commissioner of Education in New Jersey, as Superintendent of Schools in Louisville, Kentucky, and Springfield, Massachusetts, represented the first break with the “heir on the spot” tradition that went back for more than ninety years. In addition, he was neither a native of New England nor a product of New England education, so that he brought with him many new ideas from his wealth of experience in other parts of the country.

He was a tall and dignified man, who carried himself like a soldier but who had nothing of the martinet in his makeup. He loved people; he enjoyed good conversation; he felt at home with young people. He believed in making Bridgewater a truly coeducational institution, encouraging men’s activities, the Boyden Men’s Club, intercollegiate and intramural athletics, and student attendance at athletic, social, musical, and dramatic events. College programs received his attention, and when he left the college, he carried with him the sincere affection and respect of the faculty and students.

In 1937 he resumed the position of Superintendent of Schools in Louisville, and he served there until his retirement. Dr. Scott died in July, 1965.