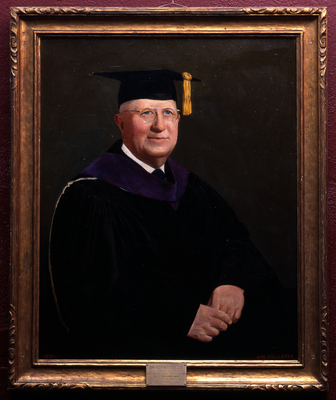 Dr. John Joseph Kelly served as President of Bridgewater Teachers College from 1937 to his death in the fall of 1951. To the men of the college in the 1920s and the 1930s who remember him fondly as the Dean of Men, he was chief friend and adviser.

Dr. Kelly was born in Worcester, Massachusetts, July 24, 1883, and in his childhood his family moved to Fitchburg. He was graduated from Fitchburg Normal School and taught in the public schools of Littleton, Fitchburg, and Springfield. He came to Bridgewater in 1918 as an instructor in practical arts, and his teaching program later expanded to include history of education, school law, and ethics.

In 1924 he was appointed Dean of Men, and for the next dozen years the men of the college attended his orientation course and his lectures on professional ethics. He willingly shared his many experiences with the students, telling them of the pitfalls to avoid in practice teaching, of their relations to others in the profession, and of their opportunities to advance. To all he was a willing listener, offering encouragement and aid and finding work opportunities for students struggling through college in the depression years.

In addition to his teaching and administrative work, he supervised practice teachers in a number of cities and towns and expanded his educational and professional activities. He earned his Bachelor’s degree from Boston University and his Master’s degree from Boston College. After he assumed the presidency of Bridgewater, Providence College awarded him the honorary degree of Doctor of Law and Rhode Island College awarded him the honorary degree of Doctor of Education. He served a term as president of the Plymouth County Teachers Association, was an active member of several education associations, and consultant to the Educational Policies Commission of the American Council on Education.

When Dr. Zenos E. Scott resigned in 1937, Dr. Kelly was appointed president of Bridgewater Teachers College. During his administration there were several important educational developments. The general education program of the college was strengthened, making the first two years almost exclusively liberal arts, a policy that was continued and developed by his successor. In the fall of 1937 the full-time graduate program was instituted, and the first Master of Education degrees were awarded in June of 1938. The continuing studies and summer school programs were instituted and developed, providing much-needed service to teachers of the area.

Throughout this period Dr. Kelly’s active interest in the activities of the men students continued. He was adviser to the Boyden Men’s club and to the Men’s Athletic Association and encouraged participation by the men of the college in inter-collegiate and intramural sports, attending many of the games and cheering the teams to victory, even against his own alma mater. Bridgewater men invited him to most of their functions and he was an honorary member of alpha Chapter, Kappa Delta Pi.

In his presidency, the college was visited by a committee from the American Association of Teachers Colleges, and Bridgewater was accredited by this body. Shortly afterwards other accrediting agencies added their notes of approval.

Dr. Kelly had served his apprenticeship under Dr. Arthur Clarke Boyden. He carried on the traditions so well established by the Boydens and set an example of love of Bridgewater and understanding of the Bridgewater spirit and showed a genuine belief in the life of service as exemplified by our college motto. With his death in November, 1951, Bridgewater lost a leader, who was, in the words of his successor, “a true giant among men.”