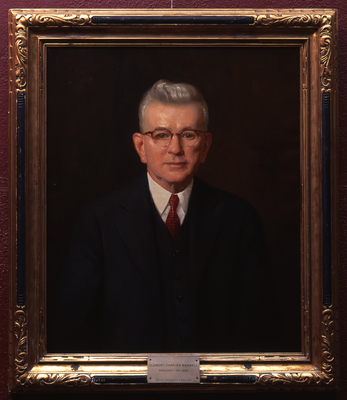 Dr. Clement C. Maxwell (1898-1969), who became the seventh head of the college in 1952, had been chairman of the English department since 1937. In addition, he served as Dean of the Graduate school and at one time as director of continuing studies and of the summer school at Hyannis.

A native of Taunton, he was a graduate of Holy Cross and Fordham University and had extensive experience as a secondary school teacher and a college professor before coming to Bridgewater.

The students who were privileged to sit in his classes in English literature remember his brilliant and witty lectures. He shared his knowledge of English authors, Dickens and Thackeray in particular, with all who would converse with him, and he inspired many students to do advanced work in major graduate schools.

He headed the college in a period of tremendous expansion. The membership on the college faculty tripled, new courses were added and old offerings revised, new majors were established. He reorganized the administrative system of the college to concur with the standard college organization. Planning for the Bachelor of Arts program was completed before his retirement. Two new dormitories and the new gymnasium (later named in honor of Dr. John J. Kelly) were constructed, and the old gymnasium was remodeled into a library, named the Clement C. Maxwell Library in his honor in 1963.

In his inauguration address he praised the leaders of the College in the past. He pleaded with the faculty and students of the college “to follow the gleam,” and he led the college successfully in this endeavor. Dr. Maxwell’s ten years of service as president of the college mark the greatest decade of growth in the history of the college to date, and he produced a record for future generations to emulate.