The history and records of the First Parish Unitarian Church of Bridgewater, as found in the church records and other sources.

First Parish Bridgewater Unitarian Universalist was originally called the South Parish or South Precinct. It was created by an act of the General Court of the Colony of Massachusetts in April, 1716. The actual effective date of incorporation was June 1, 1716. In that period a town and its church were considered one and the same. The new congregation in what would later be called the Town of Bridgewater was a mostly amicable split off from the First Church in what is now called West Bridgewater. However, it is believed that the new congregation continued to attend services at First Church while its own building was being constructed. That new building located on the same site as the current structure was ready in August of 1717 and the congregation moved into its new home with a dedication service held on August 14, 1717.The sermon that day was given by the Rev. James Keith, the minister at First Church. The South Parish called and ordained its own minister, the Rev. Benjamin Allen, who gave his first sermon a few days later. Rev. Allen served until 1730 when Rev. John Shaw became minister and he served until 1791, an astounding sixty years. Rev. Zedekiah Sanger D.D. followed in 1788 (before the aged Rev. Shaw actually died) and he served until 1818. Rev. Sanger was instrumental in the establishment of the Bridgewater Academy. Both Rev. Shaw and Rev. Sanger are buried in the Old Bridgewater Cemetery near the First Parish meeting house.

In the first decades of the nineteenth century the First Parish, along with scores of other churches, bolted from the Congregational Church and became part of the new American Unitarian Association in 1825. In the 1840's First Parish played an important role in the town in its competition with Plymouth to become the location of a State Normal School. According to one source the town offered its Town Hall as a temporary home to the potential school, something it was able to do because First Parish agreed to let the town use the meeting house for town meetings. Later when the school built its own building on School Street, part of the dedication ceremonies were held in the new (third) First Parish Building. That 1845 building still stands to this day. Eventually, the congregation joined the Unitarian Universalist Association when the Unitarians merged with the Universalist Church of America in 1961. 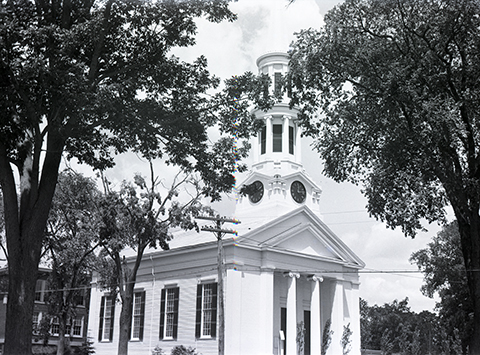