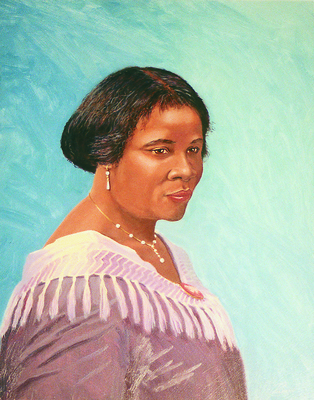 Madam C.J. Walker was an entrepreneur, hair-care industry pioneer, philanthropist, and political activist. She was born in Delta, Louisiana in 1867. Together with her husband and her business partner, Charles Walker, Madam Walker developed her own line of hair products and remedies. From 1912 to 1916, Madam Walker crisscrossed the country and gave lectures promoting her business, as well as other Black institutions, at conventions held by Black religious, fraternal, and civic organizations. She created a national organization called the Madam C.J. Walker Hair Culturists Union of America. She also organized the first federation of Black hair-care and cosmetics manufacturers. In 1918 she was the keynote speaker at several National Associations for the Advancement of Colored People fund raisers. She donated thousands of dollars to Black schools, organizations, individuals.

When she died in 1919, she was widely considered the wealthiest Black woman in America and reputed to be the first Black American woman millionaire.