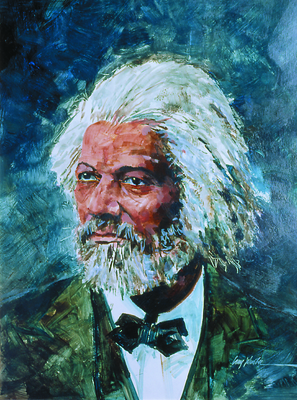 Frederick Douglass was the leading spokesman of American Negroes in the 1800s. Born a slave, Douglass became a noted author and speaker. He devoted his life to the abolition of slavery and the fight for Negro rights.

Frederick Augustus Washington Bailey was born in 1818 in Tuckahoe, Maryland. At the age of eight he was sent to Baltimore to work for one of his master’s relatives. There, helped by his new master’s wife, he began to educate himself. He later worked in a shipyard, where he caulked ships, making them watertight.

In 1838, the young man fled his master and went to New Bedford, Massachusetts. To avoid capture, he dropped his two middle names and changed his last name to Douglass. He got a job as a caulker, but the other men refused to work with him because he was black.

Douglass then held a number of jobs, among them collecting rubbish and digging cellars. In 1841, at a meeting of the Massachusetts Antislavery Society, Douglass told the audience what freedom meant to him. The audience was so impressed that the society hired him to lecture about his experiences as a slave. During the early 1840s, Douglass protested against segregated seating on trains by sitting in cars reserved for whites. He had to be dragged from the white cars. Douglass also protested against religious discrimination. He walked out of a church that kept blacks from taking part in a service until the whites had finished participating.

In 1845, Douglass published his autobiography, Narrative of the Life of Frederick Douglass. He feared his identity as a runaway slave would be revealed when the book was published, so he went to England that same year. In England, Douglass continued to speak against slavery. He also found friends who raised enough money to buy his freedom.

Douglass returned to the United States in 1847 and founded an antislavery newspaper, the North Star, in Rochester, New York. In the 1850s, Douglass charged that employers hired white immigrants ahead of black Americans. He felt that the black man was being pushed aside in favor of the white immigrant, “whose color is thought to give him a better title to the place.” He accused even some abolitionist businessmen of job discrimination against Negroes.

Douglass also led a successful attack against segregated schools in Rochester. His home was a station on the Underground Railroad which helped runaway slaves to reach freedom.

During the Civil War, Douglass helped recruit blacks for the Union Army. He discussed the problems of slavery with President Abraham Lincoln several times. Douglass served as a Recorder of Deeds in the District of Columbia from 1881-1886 and as a U.S. minister to Haiti from 1889 to 1891. He wrote two expanded versions of his autobiography – My Bondage and My Freedom (1855) and Life and Times of Frederick Douglass (1881). Frederick Douglass, fighter for justice, died in 1895.