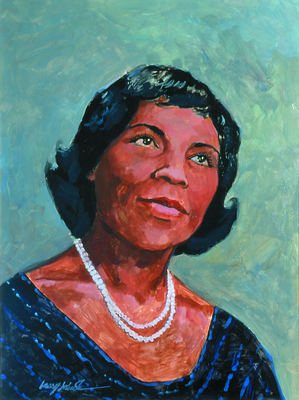 Marian Anderson, who has often been called “the world’s greatest contralto,” perhaps had a greater influence in opening doors for other black singers than anyone else. She was the first black artist to become famous on the concert stage and the first black soloist to sing with the Metropolitan Opera of New York City.

Ms. Anderson, born in Philadelphia, Pennsylvania in February 1897, was the oldest daughter of John and Anna Anderson. From an early age, she had an interest in music; she learned to play the piano and was singing in Union Baptist Church at the age of six. At the age of eight, she gave her first concert. Although untrained, her talent and versatility were immediately obvious, because she was able to sing soprano, alto, tenor, and even bass parts. With the help of her high school principal and black actor John T. Butler, Ms. Anderson met the famous voice teacher Giuseppe Boghetti. At first, Boghetti was not impressed with what he heard. However, after she sang her rendition of the Negro spiritual “Deep River,” he changed his mind.

Aided by a Julius Rosenwald Fellowship, Ms. Anderson studied abroad in Germany. She understood that to be successful in America’s opera houses, a European reputation had to be established. She made her European debut in Berlin and was invited to tour the Scandinavian countries, where she sang in both Swedish and Finnish and before King Gustav of Sweden and King Christian of Denmark. Ms. Anderson became a star attraction in Europe. In 1935, during her debut in France, she met the American Impresario, Sol Hurok. Hurok was so impressed with her singing that he offered her a management contract that would feature her in fifteen concert halls throughout America.

Upon her return to the United States, Marian Anderson performed at New York’s Town Hall as a renowned artist. With Hurok’s backing, she walked through doors that had been previously closed to blacks. It was not long before Ms. Anderson became a prima donna. In 1936, she was asked to give a performance at the White House. She confessed that this occasion was the first time that she had really been frightened on stage. She and Eleanor Roosevelt became close friends, and that friendship became evident with the Daughters of the American Revolution affair. Despite Ms. Anderson’s tremendous success, the Daughters of the American Revolution refused to let her perform in Constitution Hall in 1939. The public outcry was so great over this issue that Mrs. Roosevelt withdrew her membership from the organization. The White House made arrangements for Ms. Anderson to give her concert on Easter Sunday on the steps of the Lincoln Memorial before an audience of 75,000. She sang from Handel, Hayden and Schubert, but her repertoire also included spirituals. Ms. Anderson said the spirituals gave an aura of faith, simplicity, humility and hope. Later, she did sing at Constitution Hall.

For more than 30 years, Marian Anderson toured widely throughout the world and broke many racial barriers. She received many honorary degrees and awards for her achievements in the field of music. Some of them were a request for a command performance by the British Crown; a decoration from the government of Finland, the Spingarn Medal; the Presidential Medal of Freedom in 1963; the first black to receive a Congressional Gold Medal; and she was inducted into the National Women’s Hall of Fame in Seneca Falls, New York.