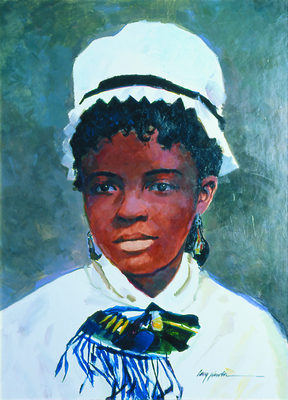 At the New England Hospital for Women and Children in Roxbury, Massachusetts, a three-by-five, black, paper-covered memorandum book is kept under lock and key, along with other historical materials dealing with the founding and operation of this institution devoted to the medical and nursing education of women. On page five of this simple little book, the name Mary Mahoney has been inscribed. Thus began the record of the indomitable courage of the ninety pound Negro woman who became the first graduate nurse of her race in America.

Mary Mahoney was born in Boston in 1845; an unverified report gives the date as April 16. She lived with her parents, Charles Mahoney and Mary Jane Steward Mahoney, at 31 Westminster Street in Roxbury.

Could she have known how much her enrollment in a school of nursing was to mean to the future of nursing, that knowledge might have helped her over the rough places where she trod. It might have eased for her the fatigue of the sixteen-hour day and the weariness of the seven-day week devoted to washing and ironing, cleaning and scrubbing, which was the lot of student nurses of her day.

Unlike many blacks of her day, Mary Mahoney decided not to go into domestic work, but enrolled in nursing school. In 1879, out of a class of forty students, only she, at age thirty-four, and two other white students, graduated. With her graduation, Mahoney changed the face of nursing. Black students were accepted to the school as long as they met the requirements. Also, as a professionally trained nurse, she was noted for her expert care of the sick.

Mahoney recognized the need for nurses to work together to improve the status of blacks in the profession. She became an inspiration to The National Association of Colored Graduate Nurses and helped make it possible for the nurses to be received at the White House by President Warren G. Harding. Because of her dedication and untiring will to inspire future generations, Mary Eliza Mahoney has been an inspiration to thousands of men and women of color who are part of the nursing profession.