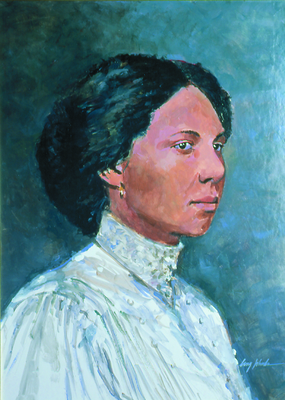 Celebrated as a sculptor whose artistic vision and understanding of the black experience was well ahead of her contemporaries, Meta Fuller was the first black American artist to draw heavily on African themes and folk tales for her subject matter. She was a native of Philadelphia and the product of black middle-class rearing. She attended the Pennsylvania Museum School of Industrial Arts (now the Philadelphia College of Art) from 1894 to 1899 and continued her studies at the Pennsylvania Academy of the Fine Arts in Philadelphia from 1903 to 1907. By 1902, however, Fuller was already an established artist in Paris, where her work had been exhibited at Siegfried Bing’s famous gallery for modern art and design.

In choosing her subject matter Fuller looked to the songs of black Americans and to African folk tales for inspirational themes that focused on pathos and joy in the human condition. Fuller introduced America to the power of black American and African subjects long before the Harlem Renaissance was under way. Under Fuller, the aesthetics of the black visual artist seemed inextricably tied to the taste of white America; more particularly, perhaps, to subject matter and definitions of form derived from European art. Framingham, Massachusetts, and the city of Boston represented for her the partial fulfillment of the European ideal in America. Indeed, Harlem itself was never home for Meta Warrick Fuller, but the ideals of the Harlem Renaissance were hers in form and spirit. She exhibited in Washington, D.C. with the Harmon Foundation and later traveled to New York to serve as a juror for their exhibitions, which represented the most outstanding examples of art by black Americans at that time.

In 1914, Fuller created a sculpture which anticipated the spirit and style of the Harlem Renaissance. Entitled Ethiopia Awakening, it symbolized the emergence of the New Negro. Her desire to awaken black people to the consciousness of nationhood and anti-colonialism is evident in her choice of the African motif: Africa is on the brink of self-propulsion and self-fulfillment in Ethiopia Awakening. Fuller’s work was precocious, communicating a message of hope in what seemed like a hopeless world beset with war and famine which made a travesty of the edict of the peace purported to exist among the nations of the Western world.

The culminating statement of the artist’s career is found in her celebrated work, Talking Skull, executed in 1937. An African male kneels gently in front of a skull silently communicating his thoughts, undisturbed by the gulf which separates life from death. Dramatic in its appeal to have us reason with ourselves to see our final end, the work is convincing in its symbolic traditional means of communicating the mysteries of life and death.