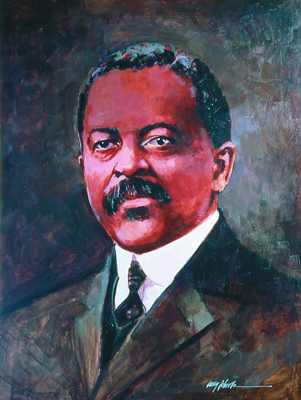 Trotter’s career was launched in Boston as a real estate broker, but his ultimate goal was achieved in 1901, when he established the militant newspaper, The Guardian. The main purpose of the newspaper was “propaganda against discrimination based on color and denial of citizenship rights because of color.”

The Guardian became a national institution, and so did its editor, William Monroe Trotter. He opposed all compromises on civil rights, whether they were proposed by Booker T. Washington or President William Howard Taft. On July 30, 1903, at the Columbus Avenue African Zion Church in Boston, Booker T. Washington was the featured speaker. Trotter and his followers hissed and interjected remarks to such an extent during the course of Washington’s address that the police had to be called; some sources say that Trotter threw a stench bomb into the audience. Trotter and his cohorts were arrested, fined and sentenced to the Charles Street Jail for 30 days. He detested Washington’s leadership and compromising position, collaborating instead with W.E.B. DuBois in 1905, in the organization of the Niagara movement, forerunner of the National Association of the Advancement of Colored People.

As the “watchdog” of discrimination, Trotter did not hesitate to protest to the President of the United States. In 1906, he challenged Theodore Roosevelt over the discharge of three companies of the 25th United States Infantry Regiment in an incident in Brownsville, Texas. In 1910, he organized a successful demonstration against the Negro-baiting play, The Clansman, in Boston; and again, in 1915, he picketed the theater where Birth of a Nation was being shown. He was arrested, tried, and eventually acquitted for this demonstration.

Trotter led a delegation to protest the discriminatory policy against Negro employees in government offices. His greatest feat occurred in 1919, when the Paris Peace Conference was convened. Trotter applied for a passport and was denied. In order to get around the denial, Trotter learned to cook and to reach Europe, he obtained a job on a trans-Atlantic steamer as a second cook. In Paris, he appeared at the conference as a delegate of the National Equal Rights League and as Secretary of the Race petitioners to the Peace Conference. Returning home, Trotter continued all of his efforts in the fight for civil rights. William Monroe Trotter was a dedicated man to the cause of civil rights for black people worldwide.