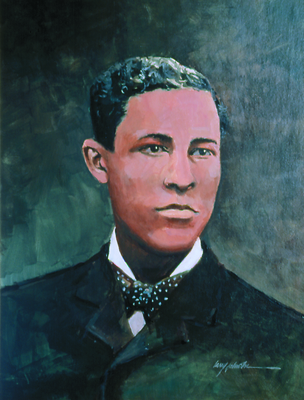 Jan Ernst Matzeliger, a shoemaker, was born in Paramaribo, Dutch Guiana, the son of a Negro woman and a Dutch engineer, in whose machine shop he began working at the age of ten. Although he could speak little English, young Jan earned his passage to the United States as a sailor. He found work in Philadelphia and later moved to Lynn, Massachusetts, where he learned shoemaking, a trade in which he worked for the remainder of his life. Before he died, he invented the lasting machine, which revolutionized the manufacture of shoes and helped make Lynn the shoe capital of the world.

Mechanization of shoemaking had been applied to the cutting and stitching of leather, but the final problem of shaping and attaching the upper portion of the shoe to the leather sole still remained. This slow, tedious task, which was done by the shoemakers working by hand, produced a bottleneck: the men could not finish a shoe as rapidly as a machine produced its parts.

Matzeliger recognized the problem as he worked at his bench, stretching, shaping, and attaching each shoe to its sole. In secret, he experimented with a crude wooden machine, and then with an iron model, on which he worked for ten years until he perfected it. He sent his diagrams to Washington D.C. for a patent and on March 20, 1883, received his grant for the “lasting machine.” He had invented a machine which held the shoe on the last, gripped and pulled the leather down around the heel, set and drove in the nails, and then discharged the completed shoe.