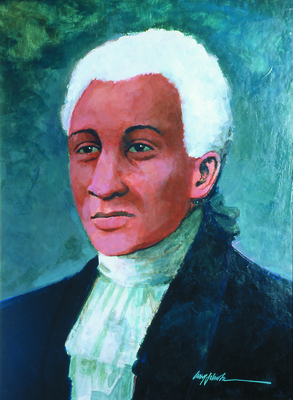 Prince Hall, founder of the oldest Negro fraternal organization in America, was born in Barbados, British West Indies, in 1735, the son of an English father and a free Negro mother. He was trained to become a skilled leather worker but after a few years of training gave up that apprenticeship and migrated to Boston, Massachusetts, where he became a leader in the black community of the city.

During the Revolutionary War, Prince Hall and 14 other free men of color were inducted into the Masonic Lodge by a group of British soldiers stationed in Boston. When the British Army evacuated the area the following year, Hall organized the first Masonic Lodge for Negroes in America. He obtained a charter from England in 1787 for the African Lodge Number 459. He was elected master of the organization and set up African Lodges in Philadelphia and Rhode Island in 1797. The name African Grand Lodge was changed to Prince Hall Grand Lodge after the organizer’s death in 1807.

The founder of Negro Freemasonry was a champion of Negro rights. A self-educated man and a clergyman, he recognized the value of education and, in 1787, campaigned for the establishment of schools for Negro children in Boston. He was a property owner of the city, which entitled him to vote and participate in the affairs of the state. He petitioned the Massachusetts legislature to support the cause and especially the protection of free Negroes from kidnapping and being sold into slavery.

As a patriotic citizen of Massachusetts, he had asked the Committee of Safety for the Colonies to allow him to join the Continental Army, which was organized by the Second Continental Congress with George Washington as the commander-in-chief. His petition was approved, and he served in the Continental Army during the Revolution.