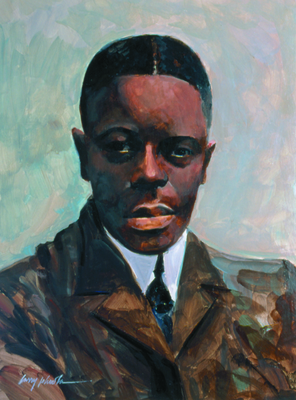 It is difficult for us today, to reach back into our imaginations to recreate the thrill and excitement of bicycle track racing between 1890 and 1910. Yet it was, nearly one hundred years ago, a hugely popular and surprisingly modern sport. In fact, among spectator sports in the United States during those two decades, it was certainly as popular as, if not more popular than, baseball, boxing or horse racing. About a thousand professional bicycle racers competed fiercely for lucrative prizes, and only a few big champions walked away with the coveted honors. Bicycle racing appealed to people from all social strata. Competition was fast and intense, often rough and dangerous. In a world without cars, motorcycles or airplanes, racing cyclists were the fastest humans on earth. They were heroic and glamorous figures.

Into this supercharged sport, a small, wiry, and extremely fast black teenager emerged – Marshall W., nicknamed “Major,” Taylor. In a world where black people were expected to know their place and not to challenge the dominance of whites, the success of this plucky, determined youngster against white competitors came as a disturbing shock, and his astounding speed as a revelation. Marshall Walter Taylor, the son of Taylor and Saphronia Kelter Taylor, was born on the outskirts of Indianapolis on November 26, 1878. He was one of eight children; five girls and three boys, raised in humble, rural poverty not far from the noise and bustle of a rapidly expanding industrial city. As a young boy, he became the playmate and companion to Dan Southard and lived in the Southards house and was treated like another son. This period of living and learning in the Southard house lasted from the time he was about eight to twelve or thirteen. He was introduced to class, a race, and a world of wealth and privilege. Besides learning to read and write from a private tutor, he learned to talk, think and relate to others in ways different from those he would have learned in a simple rural environment.

Marshall Taylor was soon thrust into the real world from the artificial comfort and security when the Southard family decided to move to Chicago. With his most prized possession, the bicycle the Southards gave him when the left Indianapolis, Marshall began to earn his first few dollars doing what so many children do, getting up early in the morning to deliver newspapers. Taylor then worked in a bicycle shop doing repairs, teaching customers how to ride a bicycle, and doing exhibitions and tricks after regular working hours. He first appeared as an amateur in races around Indianapolis and Chicago and later in Massachusetts, Connecticut and New York. Soon recognized as the “colored Sprint Champion of America,” he turned professional when he was just eighteen years old and astonished everyone who saw him with his prodigiously talented performances.

Taylor continued to work at the bike shop until prominent bicycle racer “Birdie” Munger coached him for his first professional racing success in 1896. Despite continuous bureaucracy – and at times, physical opposition, he won his first national championship two years later and became world champion in 1899 in Montreal and American sprint champion in 1899 and 1900. He broke a series of world records and in 1901 received rapturous acclaim during a triumphant tour of Europe – the most international tour of European countries ever undertaken by a black American athlete. Against the best bicycle racers of the world, he enjoyed a position of unequaled supremacy.

He was almost certainly the first black athlete to be a member of an integrated professional team, the first to have a commercial sponsor, and the first to establish world records. He was the first black athlete to compete regularly in open, integrated competition for an annual American championship. In all of these achievements, Taylor set an example of accomplishment and pride for black Americans. He was also a representative of black America abroad at a time when many people in Europe had never seen a black person. When Marshall Taylor died penniless in 1932 in Chicago at the height of the Depression, he was buried in a pauper’s grave. There was no fanfare of eulogies for the man the world had known and cheered. Even when he was reburied in 1948 and his achievements praised at a Chicago memorial ceremony, it was still not the right moment to elevate him to his true stature as one of the preeminent black American sports pioneers.