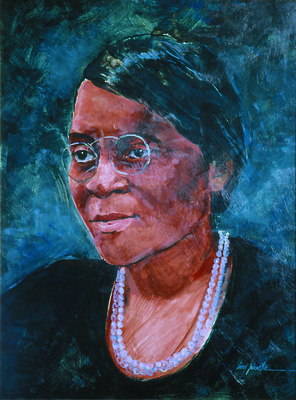 Charlotte Hawkins Brown, founder of the Palmer Memorial Institute, was born in Henderson, North Carolina. Her family moved to Cambridge, Massachusetts, where she attended the public schools of the city. She graduated from the State Normal School in Salem in 1901, and returned immediately to North Carolina, determined to start a “farm-life” school. Near Sedalia she found an unoccupied shack. With the cooperation of residents and area churches, she opened a school and completed a year of teaching. She returned to Massachusetts in the summer, organized a Sedalia Club to support the work of the school, and interested two families who underwrote the work for one year and donated a large tract of land for future growth and development.

Disaster struck the institution in December 1917, when fire destroyed the wooden building. This loss opened the way for a series of new brick buildings, since staunch friends of Mrs. Brown, in both North Carolina and New England, raised money for the school. In 1920, the Julius Rosenwald Fund contributed to the maintenance and building program. Charlotte Brown continued to study while building and directing Palmer Memorial Institute. She received her college degree from Wellesley.