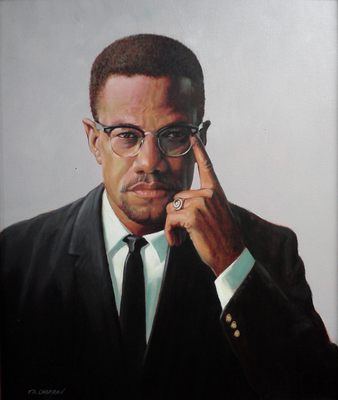 Malcolm X was born Malcolm Little on May 19, 1925 in Omaha, NE. His mother, Louise Norton Little, was a homemaker occupied with the family’s eight children. His father, Earl Little, was an outspoken Baptist minister and avid supporter of Black Nationalist leader Marcus Garvey. In 1929, their Lansing, MI, home was burned to the ground. Two years later, Earl’s body was found lying across the town’s trolley tracks. Louise suffered an emotional breakdown several years after the death of her husband, was institutionalized, and her children were split up amongst various foster homes and orphanages.

Malcolm was a smart, focused student. He graduated from junior high at the top of his class. However, he lost interest in school when a teacher told him that his dream of becoming a lawyer was not realistic because of the color of his skin. He dropped out, spent time in Boston working various odd jobs and traveled to Harlem where he committed petty crimes. By 1942, he was coordinating various narcotics, prostitution and gambling rings. Malcolm returned to Boston where, in 1946, he was arrested and convicted on burglary charges and sentenced to prison. It was during this period of self-enlightenment that Malcolm would begin to study the teachings of Nation of Islam (NOI) leader Elijah Muhammad, who taught that white society actively worked to keep African-Americans from achieving political, economic and social success.

By the time he was paroled in 1952, Malcolm was a devoted follower with the new surname “X.” He was appointed a minister and national spokesman for the NOI. Elijah Muhammad charged him with establishing new mosques in Detroit and Harlem. Malcolm used newspaper columns, as well as radio and television to communicate the NOI’s message across the United States. Crowds and controversy surrounding Malcolm made him a media magnet. He was featured in a week-long television special that explored the fundamentals of the NOI, and tracked Malcolm’s emergence as one of its most important leaders. Racial tensions ran increasingly high during the early 1960s. In addition to the media, Malcolm’s personality captured the government’s attention.

Malcolm’s faith was dealt a crushing blow at the height of the civil rights movement in 1963, when he learned that Elijah Muhammad was secretly having relations with women within the organization. He received criticism for a comment he made regarding the assassination of President John F. Kennedy. After the statement, Elijah Muhammad “silenced” Malcolm for 90 days. In March 1964 Malcolm terminated his relationship with the NOI and decided to found his own religious organization, the Muslim Mosque, Inc. That same year, Malcolm went on a pilgrimage to Mecca, Saudi Arabia. For the first time, Malcolm shared his thoughts and beliefs with different cultures, and found the response overwhelmingly positive. When he returned, Malcolm said he had met “blonde-haired, blue-eyed men I could call my brothers.” He returned to the United States with a new outlook on integration and a new hope for the future.

FBI informants working undercover in the NOI warned officials that Malcolm had been marked for assassination. After repeated attempts on his life, Malcolm rarely traveled anywhere without bodyguards. On Feb. 14, 1965, the home where Malcolm, Betty and their four daughters lived in East Elmhurst, NY was firebombed. The family escaped physical injury. A week later, Malcolm’s enemies were successful. At a speaking engagement in the Manhattan’s Audubon Ballroom on Feb. 21, 1965, three gunmen rushed him onstage where they shot him more than a dozen times at close range. The 39-year-old was pronounced dead on arrival at New York’s Columbia Presbyterian Hospital.