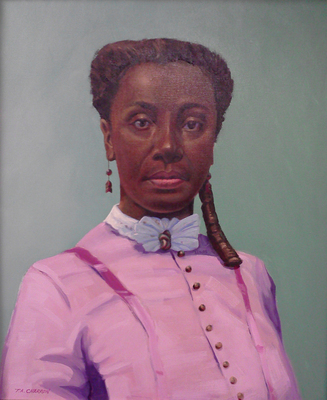 Sarah Anna Lewis of Fall River was admitted to Bridgewater State Normal School on Feb. 19, 1867, and according to research compiled by Dr. Thomas Turner, professor of history at Bridgewater State University, Miss Lewis may have been the first African-American to graduate from the institution. She was a member of the Class of 1869.

Dr. Turner discovered the information about Miss Lewis in October 2006, while researching a book he is writing on the history of the college. Until Dr. Turner found a photograph of Miss Lewis in a college album, it was believed that Mary Hudson Onley, Class of 1912, had been the first African-American to graduate from Bridgewater.

Further research by Dr. Turner and by Mrs. Mabel Bates, special collections librarian in the Clement C. Maxwell Library, led to the discovery of Miss Lewis’ application to Bridgewater. She was born on Feb. 20, 1846 and was a graduate of Fall River High School. She taught for three terms before coming to Bridgewater State Normal School, which, according to Dr. Turner, was not uncommon in the 19th century.

Subsequent information about Miss Lewis, uncovered by Dr. Philip Silvia, professor of history at Bridgewater State University, revealed that after her graduation she taught in Fall River for two years. She taught at the “1st Div. Intermediate” school level, commencing with her March 1869 appointment and continued teaching during the next academic year.

On May 11, 1871, she married Edward A. Williams and forfeited her teaching career because married women could not teach in public schools during this era. She subsequently became the mother of three children. Her husband was a cook and baker and established a catering business, but difficult economic circumstances in Fall River led the Williams family to move to Manhattan in the late 1870s. Later, they moved to the Boston area where Sarah helped support her family by working as a seamstress and dressmaker. She lived to the age of 92, passing away on Jan. 24, 1939.