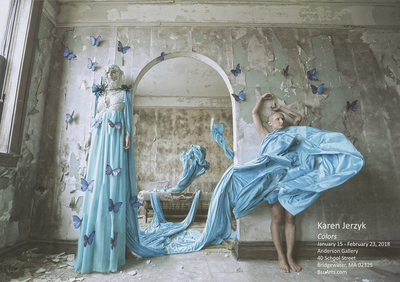 I strive to produce photos that tell a story- that connect with the viewer on a personal level. My photos are meant to be read like a book, and looked at and thought about often. There is no "right answer" to the ultimate meaning of any one of my photos, as each viewer can read the scene differently. My goal is for my photos to evoke thought and emotion. I cleaned out a little stone room in my basement and used it to do some self-portraits and also started collecting antiques and a year later had saved up enough money to commission a carpenter friend of mine to build a "wooden room" within the stone room- essentially, a giant wooden box that was about 7×7 feet. As life moved on, it laid dormant for a few months as I worked on other projects. In April 2016, my mother gave me a final warning- I HAD to get rid of the TV that had been in our driveway all winter because it was an eyesore. The TV was from the late 80s- a vintage beauty, if you will- but it didn’t really fit the aesthetic of any projects I had coming up. I had gotten it for free, and for some reason was determined to, in some way, destroy it for a photo. For a while, I had considered bringing it out into the woods and lighting it on fire, but I’m sure that’s been done a million times before. So here I am, standing in my backyard, staring at this TV…and I notice a can of spray paint behind it (yes, my backyard is a mess because of my shenanigans). A blue can of spray paint. I thought maybe, just MAYBE, it would be cool to paint the entire thing blue. But then what? Aesthetically, that's weird, and doesn't really match anything. Well, what if I painted other props blue? What if I painted the furniture blue? WHAT IF I PAINTED THE WHOLE DAMN ROOM BLUE?!?!? So, off I went to buy one of those high-powered paint guns and the rest is history. Blue was the first color I did, and everything else followed after. From April 2016-August 2016, I spent well over 1,000 hours designing entire rooms, painting them, and tearing them down for the next. The subjects I used ran the gamut of experienced, established models to people who hired me for family photos to friends and family. On average, it would take me about 15 hours to "create" one room.